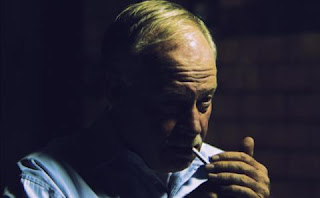 Going from "Avatar" to "Collapse" on the ole DVD is enough to give one psychological whiplash, if not a complete, raging case of the willies.

Aside from predicting, accurately and pretty much to the year, the current financial collapse, Ruppert has exposed a goodly pile of what he calls the utter "bullshit" that the American public gulps by the spoonful. In this film, well before the Tea Party was a gleam in Sarah Palin's eye, he also 'splains the confused rage that gave rise to that movement and what the future holds.

Can't do better than quote Owen Gleiberman of Entertainment Weekly about how this film will work on your head: "You may want to dispute [Ruppert], but more than that you'll want to hear him, because what he says -- right or wrong, prophecy or paranoia -- takes up residence in your mind."
Posted by J.W. Williamson at 7/19/2010 08:30:00 AM
Email ThisBlogThis!Share to TwitterShare to FacebookShare to Pinterest
Labels: financial crisis, Michael Ruppert, movies

Thanks, Jer. I'll put it in my Netflix Q.

I'm in, Jerry. Your recommendations have all been great.