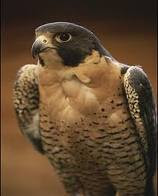 Watching the flight of peregrine falcons can make a grown adult a little weak in the knees. Their incredible swiftness -- they've been clocked at speeds over 200 mph in a dive -- make them the fastest creatures on earth, and quite efficient predators.

They've also been recently removed from the U.S. Endangered Species List, though North Carolina still lists them as Endangered.

And that's big news.
Posted by J.W. Williamson at 7/14/2010 06:32:00 AM
Email ThisBlogThis!Share to TwitterShare to FacebookShare to Pinterest
Labels: environmental issues