Potentially, an Even Bigger Disaster for the American People 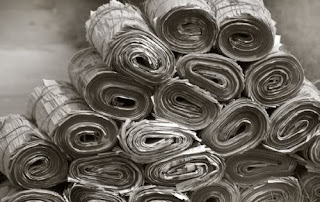 To wit ... the loss of journalism, the demise of the newspaper industry, the disappearance of investigative minds that ask sometimes obvious but oh-so-necessary questions: "What did you just decide behind those closed doors?" "Who gave you all that money?" "Who's been tickling your ribs and diddling your nether regions?"

Laura Leslie, who works the hallways of the NC State Capitol for lowly Public Radio and may be the best reporter on state government that we've got, just wrote on her blog a pretty devastating jeremiad about the current sorry state of journalism in our state. She says that when she started covering the General Assembly, there were 20 in the press corps, all jostling each other for the bragging rights of getting the story first of what was really going on. This year, at the wee-morning-hour adjournment of the General Assembly, there were only eight reporters present. That's not good for our democracy. It may be ever bit as bad as The Supremes' recent official unleashing of the Kraken of Corporate America.

The NC General Assembly bears watching. But so do all local governments in North Carolina, maybe even more desperately, because many small-town newspapers are much more into stroking local egos than they are into turning over rocks and seeing what scurries away. Somebody might get mad. It's been some years since we could depend on a blow-by-blow public accounting of what went down at every meeting of every governing body in Watauga, from the County Commission to town councils. When nobody watches -- and washes all that dirty linen in public -- then democracy suffers.
Posted by J.W. Williamson at 7/11/2010 09:47:00 AM
Email ThisBlogThis!Share to TwitterShare to FacebookShare to Pinterest
Labels: Laura Leslie, open government

The demise of the newspaper industry is going to have another unintended consequence: people will no longer have to search around their front yards trying to find where the paper landed after the newspaper deliverer threw it out the window of his/her car!

Why do you think Obama now has the kill switch to zap the internet in the name of " National Security" and the Corporate Control mainstream establishment media?