Thanks for Precisely Nothing, Sen. Burr! 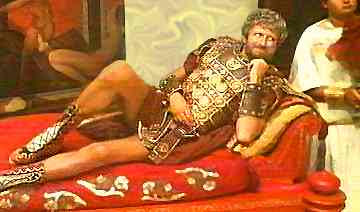 During the last six weeks, some 20,000 unemployed North Carolinians were shit out of luck when their unemployment benefits simply ran out. Today, over the strenuous objections of Sen. Dick Burr, those unemployment benefits will be extended with the breaking of the Republican filibuster. Every Republican senator, save Olympia Snowe of Maine, voted along with Sen. Burr to deepen the misery of out-of-work citizens suffering through this economic collapse through no fault of their own.

Despite the fact that there are (on average) five applicants for every job opening, Biggus Dickus continued to blame the victims of unemployment for their own predicament.
Posted by J.W. Williamson at 7/20/2010 05:31:00 PM
Email ThisBlogThis!Share to TwitterShare to FacebookShare to Pinterest
Labels: Bush economy, Richard Burr, unemployment in North Carolina

Please refrain from using Monty Python until you understand their work.

Senator Richard Burr is a villanous, corrupt, out of touch politician who will walk over the electorate on his way to glory. Let's hope his reign is over this fall as an angry electorate remembers the near criminal actions he took against the taxpayer in the now infamous Blowing Rock land trade. After being tipped off by the equally vile Virginia Foxx, Burr misled Watauga County voters several times last year during the land trade. I understand he is having a bit of trouble in the poles. He would make a great example of what not to do to the hard working, taxpaying public.

Aren't these the same people who had no problem voting for the huge tax breaks for the richest in the country?