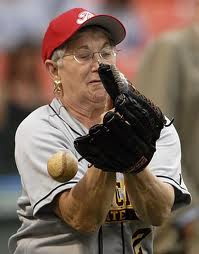 Because the James Zadroga 9/11 Health and Compensation Act required a two-thirds majority to pass the House yesterday, House Republicans were able to corral enough votes to defeat the bill. The law would have provided free health care to fire fighters and first responders affected during the 9/11 rescue and recovery. Many of those men and women are debilitated and literally dying from inhaling toxic air. But because Republicans would far rather deny the Democrats any successful legislation, they vote it down. Way to fight terrorism, Madam Foxx!

Then, to show that they're every bit as small-minded and mean as their House colleagues, Senate Republicans successfully filibustered a bill to aid small businesses with expanded loan programs and tax breaks.

These are the creatures who want the American people to put them back in charge.
Posted by J.W. Williamson at 7/30/2010 11:49:00 AM
Email ThisBlogThis!Share to TwitterShare to FacebookShare to Pinterest
Labels: Republican "brand"

unThe Republicans just cannot bring themselves to do the right thing. This mistreatment of our firefighters and first responders cannot be ignored. We must respond by voting OUT these representatives. Whom do they represent? Foxx does not represent the good people of the 5th.
Not one iota!

So why don't the democrats pass the bill on their own and claim the "high ground"?

Could it be that there aren't enough dems to vote for the bill, so the lefties are using it to try and shame some spineless repubs into voting for it?

Blaming the republicans for not passing a bill when the democrats control the house and senate is just stupid.

If it's that important then pass it.

All I can say to WH is that if Bush had proposed this bill it would have sailed through both houses with near unanimous support. This does not mean of course that Madam Foxx might still not have objected, she does not like to spend money on common people, just corporate interests. The determined obstructionism the Republicans are showing in this Congress is unprecedented in history, at least since the Civil War. There is no plan or policy behind what the GOP is doing, they delight in just standing in the way of Obama. But the GOP disarray behind the scenes is clear--there's still hope the public will see through the posturing and realize what tools Republicans are.

Because the bill required a 2/3 majority to pass, and the Dems do not own the House. They do not have a 2/3 majority there. They cannot pass it without some bi-partisanship from the Republicans.

Rep. Anthony Weiner, Dem NY, blasted the cowardly Rethugs today.If I were more computer savvy, I would have posted the link here. It's worth a Google.

And how does one differentiate "spineless Republicans" from the rest of the herd? What Repub has a spine? I know our own Rep. Foxx is of the spineless variety.