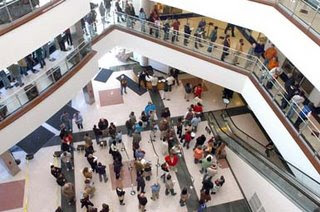 The Forsyth County Board of Elections voted 2-1 this afternoon to extend early voting on Saturday until 5 p.m. The picture to the left is from today in the Forsyth County Government Center, where voters waited literally for hours to vote. Forsyth County has been a poster child for obstructionism, opening too few voting sites for one of the state's most populous counties and then initially signaling that it had no intention of extending hours tomorrow ... until the State Board of Elections threatened the three Forsyth board members with expulsion.

They voted 2-1, but that hardly sums up the drama.

The lone Republican on the Forsyth board, Jerry Jordan, denounced the state Board and called their requirement to extend voting hours "unconstitutional" and "un-American," but (get this) "then surprised people by voting in favor of the extension."

That man's got principles! Although it was "un-American" to extend voting hours, Jordan voted for the extension, because (he said) "GOP officials thought longer hours would help their party."

We've seen a lot of nakedness this political season, but Mr. Jordan's naked partisanship in voting for something he considers "un-American" is just too precious!