Nothing Could Be Finer Than To Be in Carolina ... in the Morrrn-ning! 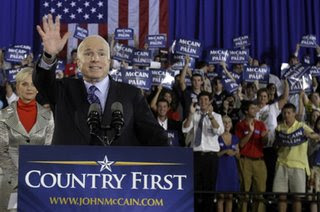 Does that look like a deer in our headlights, or what?

Best McCain quote, maybe of the millenium: "My friends, we've got them just where we want them."

John McCain, bless his heart. First, he filches "change" from Obama. Now he's stolen "comeback kid" from Bill Clinton. Has the man had an original thought all year?

What he can't seem to transcend are the hateful trajectories of his own campaign. Outside the Wilmington rally today, a sign was posted attacking Obama. "NO BAMA!" it read, and it showed side-by-side images of Obama, Osama bin Laden, and Thomas Wright, the former African-American state legislator from Wilmington who was expelled from the legislature because of financial corruption. Blacks and terrorists are sooo hard to tell apart.
Posted by J.W. Williamson at 10/13/2008 05:03:00 PM
Email ThisBlogThis!Share to TwitterShare to FacebookShare to Pinterest
Labels: Barack Obama, John McCain, racism