Forsyth Co. Board of Elections ... Stifling the Early Vote 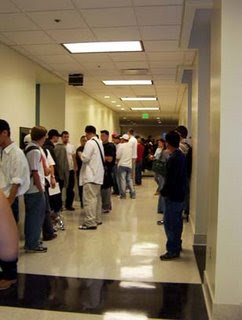 Reading about Forsyth County's long lines for early voting, one realizes how really fortunate we in Watauga are with our local Board of Elections.

Since the beginning of early voting on Oct. 16, Forsyth, one of the largest counties in the state, has maintained only four early voting sites, two of them in the 12th Congressional Dist. and two in the 5th. Forsyth County accounts for some 38% of all the votes in the 5th District, and they provide only two early voting sites?!

Forsyth currently has the longest lines in the state and the fewest polling sites per capita.

The Forsyth Elections Board seems quite surly about it, too. They'll open more sites next week, they say, so in the meantime, wait in line over two hours or come back another day.

Members of boards of elections are appointed by the local political parties, two by the Democratic Party and one by the Republican (because the governor is Democratic. Don't yell at me ... that's the way the NC law is written). Wouldn't surprise us in the least if early next year, and if Bev Perdue wins the governor's race, there'll be some fresh blood on the Forsyth Board of Elections. If Pat McCrory wins, there'll certainly be fresh blood, and early voting will become even more problematic. As it will in Watauga too.
Posted by J.W. Williamson at 10/23/2008 04:01:00 PM
Email ThisBlogThis!Share to TwitterShare to FacebookShare to Pinterest
Labels: Beverly Perdue, Forsyth County Board of Elections, Pat McCrory, Watauga County Board of Elections