Dewey Estes and the Real Woman 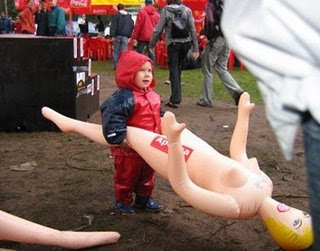 EAST FERGUSON, N.C. (AP) – The cancellation of an expected Sarah Palin campaign rally on the campus of Appalachian State University has left a Caldwell County Republican not only bitterly disappointed but also holding an expensive bag.

When news that Palin might come to the ASU campus tomorrow for a massive campaign rally leaked out from secret contacts between the McCain campaign and the ASU Student Government Association, Caldwell County gun dealer and Republican precinct chair Dewey Estes got busy organizing a special demonstration of affection for Palin that he hoped would involve scores of Palin enthusiasts and also attract national media attention.

In anticipation of the rally, Estes purchased 12 gross (144) inflatable female sex dolls, all with lots of brunette hair, and was planning to hand these out at the Palin rally to men to wave from the crowd. “We thought it would be a real tribute to a real woman. We just wanted to show the world how we felt about our Sarah,” Estes said.

“Hell, I would have even volunteered to blow them all up,” Estes said.

Estes was also planning to add extra real lipstick to each inflatable doll. But then the bottom dropped out of his plan: the McCain campaign discovered that ASU students would be leaving on Wednesday for Fall Break, so the rally was canceled.

Estes’ frustration at not being able to present a colorful tribute to Palin is nothing compared to his frustration at being stuck with 144 inflatable sex dolls. “Make that 143,” said Estes. “I ruined one of them with an acetylene torch. My bad. The others are still in their boxes. Maybe I’ll have a yard sale and donate the money to the Palin campaign.”
Posted by J.W. Williamson at 10/14/2008 02:01:00 PM
Email ThisBlogThis!Share to TwitterShare to FacebookShare to Pinterest
Labels: Appalachian State University, Sarah Palin