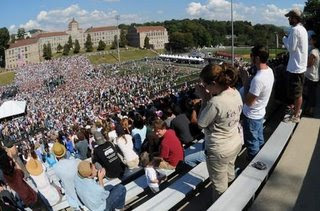 The Asheville Citizen-Times says there were 28,000 people there. Many were from Watauga County, including Bricca Sweet, who spoke to the crowd as one of North Carolina's original Obama "organizing fellows." (Bricca's personal essay about why she switched her party affiliation from the Republican to Democratic party was published in last Friday's Watauga Democrat.)

The Citizen-Times article speculates on the Obama effect on western N.C., which has been dependably Republican (except for Watauga and Buncombe and sometimes Jackson counties). The writer notes that the past habit of North Carolina statewide Democratic candidates to be on the opposite side of the state when a Democratic presidential candidate drops by seems to have flipped this year ("Democrats whose names will be below Obama's on the ballot want to be seen at his rallies").

"I think the perception is that [Obama] is really helping, amazing as it is," said Gary Pearce, Democratic analyst and formerly political guru to Gov. Jim Hunt.
Posted by J.W. Williamson at 10/06/2008 12:33:00 PM
Email ThisBlogThis!Share to TwitterShare to FacebookShare to Pinterest
Labels: Barack Obama, Bricca Sweet, Gary Pearce