Our Mailbag Floweth Over 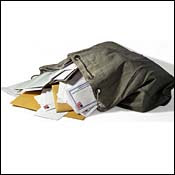 Just this week has brought a plethora -- a PLETHORA, we tell you! -- of political mail, some of which deserves actual reading:

1. Today, a letter from John McCain: "Dear Friend, We've reached a critical juncture in the campaign...."

"...I would not ask for your help if the circumstances were not so dire," John continues.

We know. We've been actually paying attention. Sarah Palin turned out to be a bit of a problem, right? and that Christopher Buckley endorsement of Obama was a bit of a slap.

But still, Senator, you're trying to get big bucks out of us and you don't even use the adjective "liberal" once? Not ONCE?? Just how desperate are you, anyway? And you don't even want the money yourself. You want me to send it to ... the Republican National Committee? Death by proxy?

2. Speaking of ambiguous gestures, one of our pieces (actually, we got two, which doesn't speak well about the GOP's wasteful habits) was from that selfsame Republican National Committee ... a four-color, four-page item headlined "AMERICA, The Land That I Love" ... at which point we have to turn the page to discover that Barack Obama will take away "our traditional American values." Then on the third panel, it quotes the National Journal, the very publication that yesterday accepted the resignation of Christopher Buckley for endorsing Barack Obama, because of his love of America. Ooooh. Damn inconvenient irony, that!

4. The biggest, the glossiest four-color, four-page piece comes from The Madam, with multiple photographs of Virginia Foxx wedging herself into family reunion shots with lots of creeped-out children. If the goal here is to try to humanize the inhuman, we're afraid it doesn't quite work. While the people she's pictured with seem secure in their ordinary reality, Madam Foxx stares down the camera like a tensed up puma, waiting to spring.

5. Another big glossy mailing attacking Barack Obama, from the Republican National Committee. Looks like they've got plenty of money, John.

6. Dan Soucek, posing in his military uniform. Interesting special pleading, that. "Paid for by Soucek for NC House."

8. through 13. Attack pieces against U.S. Senate candidate Kay Hagan (and suddenly, true political desperation has an outline). Heavy involvement here by outside groups. Three of these five pieces were paid for by the Associated Builders and Contractors Free Enterprise Alliance. One of their pieces is proud of Elizabeth Dole because she'll drill for oil everywhere immediately. The other claims that North Carolina has the highest tax burden in the Southeast and blames the patently pro-business Kay Hagan for that. (That first claim is just pure buffalo dust; the second, laughable.) The third uses "ENOUGH IS ENOUGH!" as though Kay Hagan were the Washington insider rather than Elizabeth Dole. The last two anti-Hagan pieces came from Freedom's Watch, which, according to Wikipedia, was formed in 2007 primarily to support the Bush administration and especially the Bush administration's policy in Iraq. Apparently, Kay Hagan is a threat to the Bush legacy.
Posted by J.W. Williamson at 10/15/2008 05:07:00 PM
Email ThisBlogThis!Share to TwitterShare to FacebookShare to Pinterest
Labels: Barack Obama, Dan Soucek, Elizabeth Dole, Freedom's Watch, Jerry Butler, John McCain, Kay Hagan, National Republican Party, Virginia Foxx