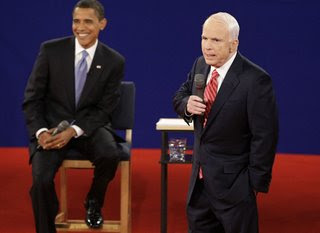 McNasty couldn't bring himself to even look at Barack Obama during the first debate. During the second one, he looked at him and then referred to him over his shoulder and with the jab of his elbow as "That one."

The way you might refer to a broken chair that a guest shouldn't sit in. Or to a 1977 Impala that ceased to run in the early '90s. "That one." The contempt was cold and clammy.

But what do you expect? How should Sleazy McSleazealot refer to an America-hating terrorist in our midst? That's the image of Obama that McCain and Pom-Pom Palin are frantically constructing before crowds eager to pick up the vibe and scream sympathetically "Kill him!" All to Palin's evident approbation.

This is where McCain has taken himself. This is where he's willing to take the country. This is a formerly respected U.S. Senator who has not much left but his fury and his spite. Yes, that one on the right.
Posted by J.W. Williamson at 10/08/2008 08:03:00 AM
Email ThisBlogThis!Share to TwitterShare to FacebookShare to Pinterest
Labels: Barack Obama, John McCain, presidential debates, Sarah Palin