Who Will Be the Next Governor of Virginia?

Virginia is a weirdo state in so many ways, going from Old Confederacy red to progressive blue in just a handful of election cycles. Both senators are Democrats. Both houses of their state lege, ditto. Governor, lieutenant guv, attorney general -- all Democrats. And the state went decisively for Joe Biden last fall.

Virginia is also weird in that its major state elections are in odd-numbered years, like this one, when it will elect a new governor (and the rest of its statewide officers and members of the state lege). So there's a scrum of candidates for governor on both sides. The Trumpists are predicting a MAGA resurgence; the Democrats are hoping for continued forward momentum. It's kind of a circus with lots of clowns.

The Democratic nominee for Governor of Virginia will be decided in a June 8 primary election. It's gonna be something to watch.
Terry McAuliffe

Yes, that Terry McAuliffe, the former govenor (2013-2017). Another weirdness: Virginia allows only a single 4-year term for its governors but allows them to come back for a 2nd go after someone else holds the job. McAuliffe is an old pal of the Clintons and served as their pick to head the Democratic National Committee, so he has a fat rolodex of potential donors. He's raised the most money so far, some $6 million just since last year. A slick operator, McAuliffe spent his years out of office raising big money for other Democrats running in the state, so he's got plenty of friends. He's been endorsed by many in the Virginia Legislative Black Caucus, ironic considering the next candidate down this list. From all I can discern, he was a popular governor, free of major scandal, but he's now a pain in the ass to younger, more progressive Democrats for returning for a second dip in the pool.

Elected in the first blue wave of 2017 to the Virginia House of Delegates. She resigned her seat in December to concentrate on her race for governor. She's raised a respectable $1.9 million. She received her bachelor's degree from the Virginia Military Institute (and thereby hangs a tale of tough perseverance, surviving the hazing of all those white boys who didn't think she belonged). She earned her law degree from the Thomas Jefferson School of Law in San Diego. Her professional experience includes working as an attorney and public defender, serving as an adjunct professor of criminal law at Northern Virginia Community College, and serving as a magistrate. She also founded a nonprofit organization called the Foundation for Foster and Orphan Children. She's gotten lots of national attention as another potential Stacey Abrams.

Currently the lieutenant governor of Virginia, Fairfax might have been considered "next in line" for the top job, but a sexual assault scandal has hurt him. Two women came forward and accused him of separate incidents of sexual assault from the early 2000s. Fairfax, a former federal prosecutor, has repeatedly denied the charges and called for law enforcement to investigate. Lawyers for both women have said they would rather participate in legislative hearings, a prospect Fairfax’s team has called a “show trial.” Probably as a result of this cloud, Fairfax's fundraising has been noticeably anemic.

The other Black woman in the race. A long serving member of the House of Delegates, she was elected to a Virginia Senate seat in the same 2017 wave that put Carolyn Foy in office. McClellan's law degree is from the University of Virginia School of Law, a pedigree that propelled her into a prominent career as a corporate lawyer. She's currently third in the money race with $1.1 million. She's considered "steady and cerebral," and she opted to keep her seat in the senate while campaigning for governor.  She highlights her work on significant legislation, such as sponsoring the first Voting Rights Act to be approved by a Southern state. She could split the Black vote with Carolyn Foy, thus advantaging Terry McAuliffe.

Currently a member of the House of Delegates, Carter proudly dons the mantle of Bernie Sanders and calls himself a socialist. He's raised little money. But he's described as a "red-headed fiery populist" on the liberal, pro-worker-rights spectrum. He's an ex-Marine, which adds a little punch to his gospel of the "have-nots" needing to rise up against the "haves." “For too long, we’ve listened to career politicians and pundits tell us that there is no other way,” Carter said in his launch video. “But no more. In this primary we can finally pick a governor that will fight for the rest of us.”

The Virginia Republican Party is split and fighting right now over how to even select their candidate for governor. The non-Trumpists are trying to force the nomination into a convention, while the Trumpists want a bare-knuckles primary. Here's background on that.
Amanda F. Chase 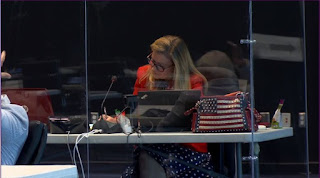 Currently the pistol-packing "Trump in high heels" who occupies a seat in the state senate (a seat recently encased in a plastic shield -- no, really -- because Chase refuses to wear a mask) who earned herself a bipartisan censure from her fellow senators for praising the Capitol insurrectionists as "patriots." She's the principal reason Republican Party leaders are desperate to keep this race out of a primary. They're terrified she could win a primary and go on to crash the whole party in November. As of the end of 2020, Chase had about $235,000, cash on hand.

He's been in the Virginia House of Delegates for three decades, and in his party's salad days, he served as majority leader and then as Speaker of the House. His voting record is not that different from Amanda Chase's, but Cox tries to project a non-Trumpist and "sane conservative" image. His one striking departure from Republican orthodoxy: He swerved on the issue of expanding Medicaid in the state under the Affordable Care Act, so to the Trumpists he's a traitor. As of Dec. 31, Cox had about $691,000 cash on hand. Cox and Chase are the only two of the six Republicans running who've ever held public office before.

Youngkin is the former co-chief executive of the Carlyle Group, a global private equity giant. Worth an estimated $254  million, the political newcomer highlights his up-by-the-bootstraps biography, including a stint in his teens washing dishes at a Virginia Beach diner to help support his family. Youngkin claimed that he had raised $1 million from supporters in the first 10 days of his campaign.

Snyder is a pioneer in social media marketing who unsuccessfully sought his party’s nomination for lieutenant governor in 2013. The establishment favorite then, Snyder now touts endorsements from hard-right figures including former state attorney general Ken Cuccinelli. A multimillionaire, Snyder has the ability and willingness to self-fund.

Doran is the former president of the Center for European Policy Analysis in Washington, where he says he helped former Soviet bloc countries rebuild after “the ravages of socialism.” He’s promising to phase out the state’s income tax.

De la Peña, a retired Army colonel, was born into poverty in Mexico and rose to a Pentagon post under Trump as deputy assistant secretary of defense for Western Hemisphere affairs.

Note: Characterizations of some candidates, particularly the last four Republicans, taken from WashPost.

Posted by J.W. Williamson at 2/23/2021 10:37:00 AM
Email ThisBlogThis!Share to TwitterShare to FacebookShare to Pinterest
Labels: Amanda Chase, Carolyn Foy, Terry McAuliffe, Virginia-State of

The VA GOP has voted to host a 'drive-thru" convention in a Liberty University parking lot. However, they announced such before even getting permission from the Lynchburg school. They are planning to used ranked choice voting to determine their nominee. The view here in the Old Dominion is that the state GOP is in disarray. Most Dems have their fingers crossed that Amanda Chase is their nominee.