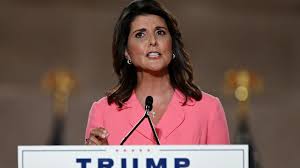 I've just become obsessed with Nikki Haley. It's no secret that the former governor of South Carolina would like to run for president. She would be an attractive candidate -- a young bright professional, daughter of Sikh immigrants from India and hence a "woman of color," someone who projects intelligence and strength. Though Haley was a loyal servant to President Donald J. Trump during his first two years in office (as US ambassador to the U.N.), she got out in time to escape scandal, and she bears no resemblance to the Marjorie Taylor Greenes of Trump World.

After the election but before the insurrection, she remained a loyal Trump defender, albeit an embarrassed one, as she tried to excuse Trump's Big Lie about election fraud. She said it was his sincere belief, hence excusable. According to her, Trump grabbed hold of tainted information and bad rumors and took the advice of idiots, which perhaps unbalanced him and led him to say things he shouldn't. But if a man sincerely believes he's been wronged, is it an impeachable offense for him to say so? Haley told reporter Tim Alberta back before the Capitol riot that all Trump's spouting about fraud wasn't impeachable because it was free speech.

That was then, a more forgivable time, followed unfortunately by the savagery of January 6th, which "triggered" Haley into open rebellion. She now wants to be the female Moses whoi will lead her Party out of Egypt.

She's zigged and zagged about Trump all along. She knows how to "accommodate herself to the dark realities of a Trump-dominated party" (as Alberta puts it), but she's always had trouble concealing her personal distaste for him. She's both defended Trump about the second impeachment (“At some point, I mean, give the man a break! I mean, move on .... Does he deserve to be impeached? Absolutely not!”), but now today, with the publication of an already notorious Tim Alberta Politico profile piece, she's apparently prepared to ditch the Trump brand and try to reclaim the GOP for herself and traditional conservatives like her -- "We shouldn't have followed him." Bam!

However, it's hard to be a strong, successful, Republican woman politician not in thrall to Trump (see Cheney, Liz). Maybe it's impossible. That's my theory, which is why I'm now obsessed with watching what happens to Nikki Haley.

As a Trump prom date, she's always had a wandering eye. She endorsed Marco Rubio in the 2016 South Carolina Republican primary, spooked like a lot of headliner Republican office-holders that year (see Graham, Lindsey). Trump was just a dirty joke waiting for the punchline. “I wanted somebody that was going to go and show my parents that the best decision they ever made was coming to America,” Haley said of Rubio, and the implied criticism of Trump by comparison cut like diamond. Didn't matter. Trump beat Rubio in the South Carolina primary by 10 points and went on to world domination. 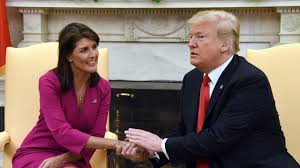 After which Haley humbled herself, sucked up to Trump as a loyal ally and willing servant, got the U.N. gig as a reward because of her new (weird) loyalty. She only stuck with that job (people forget) for two antsy years, exiting the Trump contagion just after the 2018 Fall elections, resigning her U.N. ambassadorship on December 30, 2018. Whew! She'd had enough of Trump's erratic foreign policy. Plus she was bright enough to see the potential harm to her own reputation as a Trump functionary because her boss, interested primarily in self-gratification, was making world affairs just another reality show that hinged on cruelty.

Her zigging and zagging on Trump since January 6 deserves its own map. On January 7th, the day after the insurrection, she denounced Trump's words and behavior in her keynote address at the Winter Meeting of the GOP at a resort in Florida: “President Trump has not always chosen the right words. He was wrong with his words in Charlottesville, and I told him so at the time. He was badly wrong with his words yesterday. And it wasn’t just his words. His actions since Election Day will be judged harshly by history.”

Don't know what she expected by way of reaction to those words, and since I wasn't privileged to be in that room to gauge the vibe, I have to rely on media. Apparently, she got away with it, more or less, albeit accompanied by some stony stares and perfunctory applause. She was soon complaining to Laura Ingraham about how unfairly that poor man Trump was being treated by a second Democratic goddamn impeachment: "Leave the man alone!"

But then, in an interview with Politico published today, Nikki goes full monty for the divorce. She was particularly outraged by Trump's treatment of Vice President Pence, enough so that she would go on the record. She told Alberta:

...I’m watching the television the morning of the 6th and I see Don Junior get up there,” she said, reciting the president’s son’s calls to action against Republican leaders, closing her eyes as if reimagining the scene. “And then I hear the president get up there and go off on Pence. I literally was so triggered, I had to turn it off. I mean, Jon [Lerner] texted me something and I said, ‘I can’t. I can’t watch it. I can’t watch it,’ because I felt the same thing. Somebody is going to hear that, and bad things will happen.” ...

“When I tell you I’m angry, it’s an understatement,” Haley hissed, leaning forward as she spoke. “Mike has been nothing but loyal to that man. He’s been nothing but a good friend of that man. … I am so disappointed in the fact that [despite] the loyalty and friendship he had with Mike Pence, that he would do that to him. Like, I’m disgusted by it.”

What I’ve heard again and again is that Haley’s raw skills obscure an absence of core beliefs and a lack of tactical thinking. I’ve also heard—and witnessed—how her laid-back southern persona conceals a pugnacious impulsive streak. Her unplanned outbursts and bridge-burning decisions are legend in South Carolina where she built a reputation for demanding loyalty but rarely giving it, leaving the road behind her littered with enemies as well as allies.

Gosh. She sounds a lot like the Trump we've come to know. But smarter. Surely smarter.