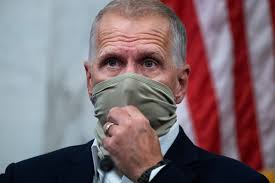 After Senator Thom Tillis's not guilty vote, I brushed him aside to get a clearer view of Senator Richard Burr's guilty vote and subsequent censuring by the NCGOP. Only later did I notice that Tillis said this after Trump's acquittal:

It is important to note that a not guilty verdict is not the same as being declared innocent. President Trump is most certainly not the victim here; his words and actions were reckless and he shares responsibility for the disgrace that occurred on January 6.

Those two (scant) sentences were buried near the end of a much longer defense of his vote. The shade he threw on Trump is weak, but it's there, a statement of waning loyalty if not outright heresy.

The rest of Tillis's statement is a lot of yadda yadda yadda about how it's unconstitutional to impeach someone out of office (boilerplate argument) and about how the House Democrats rushed to judgment without proper process and about how Democrats are anyway just as bad as Trump at inciting their base. Tillis does put his tongue in one other crack in his loyalty oath to Trump:

The ultimate accountability is through our criminal justice system where political passions are checked and due process is constitutionally mandated. No president is above the law or immune from criminal prosecution, and that includes former President Trump.

He was copying Leader McConnell, wasn't he? Everyone knows Tillis would love to be free of the former president, if only it could be done while the senator was looking the other way.

Posted by J.W. Williamson at 2/18/2021 08:47:00 AM
Email ThisBlogThis!Share to TwitterShare to FacebookShare to Pinterest
Labels: Donald Trump, Thom Tillis