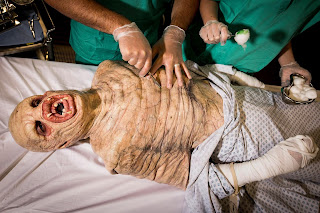 When Democrats conduct an autopsy of a bad election, there's every possibility that they'll open the chest cavity last.

News arrives this morning that some four Democratic "interest groups" -- Third Way, End Citizens United,  the Latino Victory Fund, and Collective PAC -- have "quietly launched" a review and numerical analysis of why Democrats did so poorly down-ballot in 2020. How poorly, you ask? In North Carolina, Democrats lost ground in the NC House and Senate, failing to take the majority in either chamber, and they couldn't take any Council of State seats they didn't already hold (though they came close across the board). Nationally, Democrats lost 14 seats in the US House, a dozen of which had only just been won in 2018. My eyes water at those statistics.

Third Way, a conservative Democratic interest group and a part of the quartet investigating these losses, wants the word "socialism" banned from the vocabulary and expunged from Democratic DNA. They'll also target the "Defund Police" motto as a culprit for causing the shakes among rural and exurban voters. Maybe they're right. I don't know, but I squint hard at solutions that seem philosophically allied most strongly with Wall Street self-interest.

The NYTimes article notes this: "The review is probing tactical and strategic choices across the map, including Democratic messaging on the economy and the coronavirus pandemic, as well as organizational decisions like eschewing in-person canvassing." I highlight that last phrase because I blame the absence of a ground game across much of North Carolina as a contributing factor to our losses. A major contributing factor. The excuse, naturally -- and it's a valid if convenient excuse -- was COVID fear, but some county parties managed canvassing anyway with masking and social distancing. (Not naming any counties, but I live in one of them.)
Maybe I believe too much in the "Trump effect," especially as it influenced the turnout in North Carolina, but the surge in Republican numbers in non-metropolitan counties last fall might focus the apocalyptic mind. I hate to say it, and I hope I'm wrong for the long run, but the man Trump is almost a supernatural force for disaffected citizens who often don't even vote but who hate pretty much everyone in government but especially Democrats who love "multiculturalism" more than them. The economic radicalism of Bernie Sanders gets to many of those folks in ways the Third Way Democrats might want to notice. In fact, for many white rural Trump voters, they thought Trump was going to bring that same economic radicalism to benefit them personally, but low-information voters never caught on to the fraud.
Trump intends to provide the magic going forward, you bet. But he himself won't be on the ballot again before 2024 -- if then -- and it remains to be seen if he can pump up the vote for others, including for his own unqualified carpet-bagging daughter-in-law.
Posted by J.W. Williamson at 2/21/2021 10:28:00 AM
Email ThisBlogThis!Share to TwitterShare to FacebookShare to Pinterest
Labels: Democratic Prospects, Donald Trump, Lara Trump, Trumpism