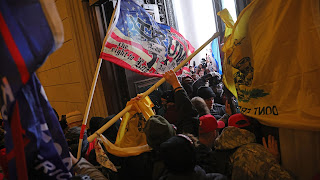 Virginia Marie Spencer of Pilot Mountain appeared in federal court in Durham yesterday morning after turning herself in to the FBI. She is charged with engaging in disorderly conduct inside the Capitol and with entering a restricted government property for the purpose of disrupting government business.
Her husband, Christopher Spencer, was previously arrested on the same charges, though he was additionally charged with obstruction of justice.
According to Wes Young, reporting for the Winston-Salem Journal, "Virginia Spencer told the FBI in an interview before charges were filed that she was in the building only a short time, that she and her husband were forced inside by the pressure of the crowd pushing behind them, and that they left by the first available exit after they got inside.

"Investigators paint a different picture: They say the video footage shows no sign of the couple looking for an exit, and that Virginia Spencer was with her husband as he took part in various demonstrations inside the Capitol: Shouting for people to break open the doors to the House chamber, chanting 'Stop the Steal!' multiple times and shouting obscenities, apparently at police officers.

"Virginia Spencer told investigators that before they entered the Capitol, they had been listening to former President Donald Trump speak to a rally, in which Trump made mention of people marching to the Capitol. That's when the couple decided to head that way."
Posted by J.W. Williamson at 2/09/2021 08:18:00 AM
Email ThisBlogThis!Share to TwitterShare to FacebookShare to Pinterest
Labels: Trumpism