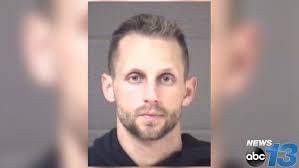 Lewis Easton Cantwell, 35, was arrested by the FBI in Sylva and appeared in federal court yesterday in Asheville for storming the capitol, destroying property, refusing to leave, and interfering with police. The judge told him he could face up to a combined 28 years for all the charges, and if he was found to be in possession of a weapon while storming the Capitol last month, that maximum time could be increased.
Because he has no criminal record, Cantwell was released on a $25,000 bond with a host of conditions, including that he cannot travel outside of western N.C. other than to travel to his court appearance. He also can't break any laws, isn't allowed to carry a weapon, and he had to hand over his passport to officials.

Cantwell is part-owner of a tea shop, Sip' Sum, in downtown Sylva.
His trial will take place in Federal court in Washington, D.C.
Posted by J.W. Williamson at 2/20/2021 09:42:00 AM
Email ThisBlogThis!Share to TwitterShare to FacebookShare to Pinterest