Democrats willing to put themselves forward in 2022 against some of the most notorious Republicans in the US Congress. Bless them, Saint Simeon, patron saint of ships of fools.

She's declared herself a candidate against the Republican poster child of Trumpist insurrection and all-around junkyard snarler, Marjorie Taylor Greene in the 14th CD of Georgia.

Holly McCormack sells insurance in Ringgold, Georgia, and has never held office before nor run for any office. Her launch video emphasizes economic opportunity: "Once thriving communities are now hanging by a thread. There’s real frustration walking these streets. Our towns aren’t what they used to be. We are hardworking people that just want a shot at the American dream. But for the people of northwest Georgia, the American dream seems out of reach."
On her Twitter feed, she refers to Taylor Greene as "Marge": "Marge is all stunts, and no substance. I’m here to talk about the REAL ISSUES impacting Georgians. She can take her circus somewhere else, because we’re going to take her seat."
McCormack has an ActBlue page, if you want to come to her side. She'll raise some serious money, but the 14th CD of Georgia is ominously red. They like Marjorie Taylor Greene because she's a roaring braggart and bully.
Kerry Donovan
She's a well known Colorado state senator who's filed paperwork declaring her candidacy against pistol-packing Republican Congresswoman Lauren Boebert in the 3rd CD of Colorado. Boebert was insurrection-adjacent on January 6th, has posed for photographs with notorious militia types, and has insisted on her right to wear a sidearm into the US House chamber.
Donovan also makes an issue of the sagging economic prospects of rural America: “Our part of Colorado has big problems we need to solve. We have a huge drought on our hands. We need to have a robust economic recovery. These are big problems that need serious and big solutions, and I think that this district deserves to have someone fighting for them in Congress."
Donovan grew up in Colorado’s mountains and first won election to the state senate in 2014. She runs her family’s Cooper Bar Ranch near the town of Edwards and previously served as a member of the Vail Town Council.
She's @KerryDonovanCO on Twitter and she too has an ActBlue account.
She also already has at least two fellow Democrats who'll compete in a primary for the privilege to take on Boebert -- ex-Marine Gregg Smith, an ex-employee of Erik Prince of Blackwater fame who says he blew the whistle on Prince; and lawyer Colin Wilhelm, who ran unsuccessfully for a seat in the Colorado House. But I'm from West Texas and naturally susceptible to a woman in a cowboy hat.
As Yet Unrecruited Democrat
Democrats in the 5th CD of Alabama are reportedly working hard to recruit a credible candidate to challenge Rep. Mo Brooks, who has made himself an avatar of Trumpist insurrection both before and after January 6th. “Are you willing to do what it takes to fight for America?” Brooks yelled into the microphone at the Ellipse rally which came directly before the Capitol siege.
Three days after the riot, Brooks was publicly proud of helping to incite it: “I make no apology for doing my absolute best to inspire patriotic Americans to not give up on our country and to fight back against anti-Christian socialists in the 2022 and 2024 elections,” Mr. Brooks told a local newspaper. “I encourage EVERY citizen to watch my entire rally speech and decide for themselves what kind of America they want: One based on freedom and liberty or one based on godless dictatorial power.”
Brooks has always operated on the Republican far-right and at the specific instrux of his God, but he seems to have tripped a wire this time among Alabama Democrats (both of them?). “I plan to use whatever small influence I have to see that Mo is defeated,’’ said former Alabama Chief Justice Sue Bell Cobb. “We don’t need an ideologue representing Alabama.’’
Maybe the experience of defeating Roy Moore and winning the Senate seat for Doug Jones -- however short-lived it was, and it was short-lived -- has sparked new life in Alabama Democrats.
In recent election cycles, the Alabama Democratic Party hasn't even bothered to recruit a candidate in the 5th CD, but following Brooks' performance as a "Stop the Steal" promoter, the state party began raising money via two online solicitations. “We cannot allow Mo Brooks to win re-election and continue embarrassing the state of Alabama,’’ said one, titled “The No Mo Bull**** Fund .... These funds will be used to hold Mo accountable and recruit and support the next congressperson from the 5th Congressional District — a Democrat.’’ They reportedly have an ActBlue page set up, but I haven't found it.
Bruno Amato 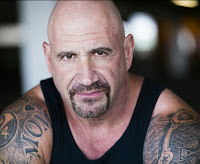 A professional Hollywood bit actor, with some 109 film credits on IMDB.com, who has announced that he will challenge Rep. Kevin McCarthy in 2022. McCarthy you know as the harried Republican minority leader and ideologically The Weakest Link. But McCarthy represents the 23rd CD in California, home to Bakersfield and valley agriculture where Trumpists grow faster than artichokes, which is exactly the reason McCarthy took back (in a Bakersfield minute) his statement blaming Trump for the insurrection. Following that fuck-up, McCarthy quickly got himself to Mar-a-Lago to kiss ass and never say a discouraging word to Marjorie Taylor Greene.
McCarthy took 62% of the vote in the 23rd last November. He'll probably take 62% in 2022, or even more.
Posted by J.W. Williamson at 2/26/2021 12:14:00 PM
Email ThisBlogThis!Share to TwitterShare to FacebookShare to Pinterest
Labels: Holly McCormack, Kevin McCarthy, Lauren Boebert, Marjorie Taylor Greene, Mo Brooks