Adam Kinzinger Wants To Take Back the Republican Party; He'll Be Purged Instead 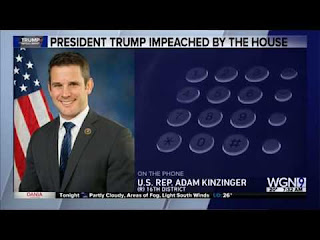 Illinois Republican Adam Kinzinger, one of "The Ten" who voted to impeach Donald J. Trump, is no moderate. He was one of the darlings of the Tea Party when he was first elected in 2010. Sarah Palin endorsed him. He still wants to fight "the leftist agenda" which he still believes will "take America backwards." So it means something that he's had enough of Trumpism.

Kinzinger has started his own PAC, "Country First," and he's recorded an effective video which I can't repost here. Check out the website. He says many things. He hits hard on the January 6th storming of the US Capitol. "I was there." This guy flies jets as a Lt. Colonel in the Air National Guard. The lawlessness of the Capitol riot forced a reckoning in him. He's had enough and won't be silent. He can't accept that the Party is cowed by Trump (let alone Marjorie Taylor Greene), that it hangs with people who are into violent overthrow:

“The reality is this: This is a time to choose …. And my goal in launching Country1st.com is just to say, ‘Look, let’s take a look at the last four years, how far we have come in a bad way, how backward-looking we are, how much we peddle darkness and division. And that’s not the party I ever signed up for. And I think most Republicans didn’t sign up for that.”

He's raising money. For what? His PAC isn't for self-aggrandisement. He's said he knows he's chopped liver in the next Republican primary. He already sounds like a politician accepting the end of his career. “The only hope you have is to accept the fact that you’re already dead,” he told Ellen McCarthy of the WashPost. He was paraphrasing everybody's favorite drunk, Charles Bukowski: “You have to die a few times before you can really live.”

Several of "The Ten" are doing just that -- dying. The Purge is on. Liz Cheney in Wyoming. Tom Rice in South Carolina. Those dudes in Arizona. Censured. They're outcasts from a Party that continues to dote on Trump, primarily because they're terrified of his supporters and the violence of their emotions. Witness the swords drawn on Liz Cheney.

Kinzinger says he has no ambition for higher office. We can wish him well raising campaign money for other candidates who also want to take back their Party. We support the project while doubting the outcome. We thought all along -- at least since 2017 -- that Trump could well mean the end of our democracy, and the fact that Biden is in the White House does not put an end to that speculation. The extreme means that Trumpism is willing to take to achieve extreme and unconstitutional ends -- and the sheer numbers willing to break windows and trespass, willing to brandish weapons, willing to lynch somebody, maybe anybody -- that bunch ain't going away so long as their cult leader ain't going away.

Posted by J.W. Williamson at 2/01/2021 10:01:00 AM
Email ThisBlogThis!Share to TwitterShare to FacebookShare to Pinterest
Labels: Adam Kinzinger, Trumpism