Alexandria Ocasio-Cortez Could Win The Presidency In 2024 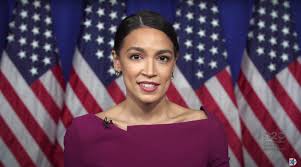 Like her or hate her, Alexandria Ocasio-Cortez is a transformational politician. Since first appearing on the national stage in June of 2018, she has grown into arguably the most formidable political talent since Barack Obama. The 31-year-old congresswoman is a progressive hero, a feminist icon, a social media sensation, and the fifth most admired woman, according to a recent Gallup survey (tied with Queen Elizabeth, Angela Merkel, and Hillary Clinton). More importantly, she has the brains and the political chops to make use of all the attention. Despite only being in Washington for a little over two years, she has emerged as the de facto leader of America’s left-wing.

AOC has not to my knowledge made any statements about a future presidential campaign, but I will speculate freely. As a general rule I assume that most talented young political leaders have an interest in being president. And with President Biden in his late 70s and unlikely to seek a second term, the Bronx congresswoman could have a real shot at the Democratic nomination as soon as 2024.

The conventional wisdom is that AOC, despite her obvious talents, is too young, too inexperienced, and too radical to be a serious contender for national office anytime soon. But this is the sort of short-sighted punditry that couldn’t fathom a Donald Trump presidency, that underestimated the historic candidacy of Barack Obama, and that promised us Bernie Sanders could never catch on as a serious primary contender. It’s lazy analysis that assumes that if something hasn’t happened in the past, then surely it can’t happen now. Considering just in the past year we have lived through a global pandemic, an insurrection, and a coup attempt carried out by the President of the United States, I suggest it’s time to think a little more imaginatively about what is and isn’t possible.

If Alexandria Ocasio-Cortez decides to run for the presidency, you can bet that her age and inexperience will be used against her. She would be the youngest president in U.S. history by several years were she to assume office in 2025.  Coming directly after the country’s two oldest presidents, however, I tend to think youth will be more of an asset than a detriment in the next campaign. She could point to the example of our two youngest presidents -- John F. Kennedy and Teddy Roosevelt -- as visionary leaders whose relative youth served them well.

As for inexperience, AOC has already been in Washington as long as Barack Obama had been there when he announced his 2008 campaign. While old ideas about requisite political experience persist among Washington insiders, voters don’t seem to harbor the same feelings. Afterall, presidents Trump, Obama, and George W. Bush all had limited traditional experience yet proved victorious over more experienced opponents.

Is AOC too radical to be elected president?  Ever since the George McGovern fiasco of 1972, the commonly accepted narrative is that Democrats can only win by running non-controversial, moderate candidates. But in this era of hyper-polarization, rapidly disappearing swing voters, and perpetually competitive presidential elections, such assumptions seem increasingly outdated. That’s not to say AOC would be an ideal general election candidate, but rather that just about anyone the Democrats or Republicans nominate has a legitimate shot at winning the presidency in this environment. Moreover there are many factors other than ideology that contribute to electability. AOC’s personal magnetism, ability to excite the Democratic base, and potential to reach out to new and infrequent voters could offset the disadvantages of her candidacy.

Ocasio-Cortez may be polarizing, but she’s not decidedly unpopular. According to the Economist/Yougov’s weekly tracking poll, her net favorability rating currently stands at -2%. While this is not a stellar favorability rating, it is a totally respectable one. It’s higher than Joe Biden’s was for most of the 2020 Democratic Primary and higher than Donald Trump’s at any point in his presidency. She’ll have to put in some work to win over Independents if she decides to run, but she starts out in a totally plausible position.

More importantly, she would begin with a large and devoted base of support. Her primary campaign would likely pick up where Bernie Sanders’ 2020 campaign left off, with a solid chunk of the left-wing of the party behind her. But I suspect her appeal could be much broader than Bernie’s ever was. As potentially the first Latinx and first woman president, she is well positioned to fire up the beating heart of the Democratic base while also reaching out to a diverse coalition of voters. And as a young outsider who just a few years ago was working as a bartender, her candidacy could help to bring a new generation of working-class millennials and gen Zers into the political arena.

While the betting money is against an AOC win in 2024, I would argue that her chances of winning the next election are no worse than Barack Obama’s in 2005 or Donald Trump’s in 2013. She enters the political stage at a time of realignment in which the old rules and norms that have governed our politics for over a generation are breaking down. These are the moments that propelled transformative politicians like Lincoln, FDR, and Reagan into the presidency, all of whom would have been unimaginable a decade earlier. In our fast-paced world we can be sure that a lot will happen before 2024. Until then, it would be foolish to count out the Democratic Party’s most gifted young leader.

Posted by J.W. Williamson at 2/19/2021 07:44:00 AM
Email ThisBlogThis!Share to TwitterShare to FacebookShare to Pinterest
Labels: Alexandria Ocasio-Cortez

The older generation has a tendency to hold onto power beyond reason. I have sensed AOC would attain the Presidency since her successful 2018 campaign. Her politics represents the disruption our electorate has been primed for by 40 years on conservative and neoliberal rule. Traveled to Texas to help out while Senator Cruz had a vacation, she's building national appeal. Time will tell.