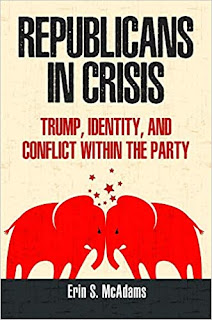 You wanna be affiliated with the Party of Donald J. Trump? Really?

An analysis of January voting records by The New York Times found that nearly 140,000 Republicans had quit the party in 25 states that had readily available data (19 states do not have registration by party). Voting experts said the data indicated a stronger-than-usual flight from a political party after a presidential election, as well as the potential start of a damaging period for G.O.P. registrations as voters recoil from the Capitol violence and its fallout.

I know, I know. We've been hearing about the imminent dissolution of the Republican Party since ... forever. And repeatedly.

To be sure, these Party defectors are not re-registering as Democrats. They're moving to the unaffiliated rolls, where they'll be ripe fruit if someone makes a credible attempt to form a third Party.