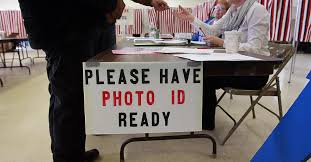 So far North Carolina appears to be in the clear -- no new voter suppression bills have been introduced in the General Assembly (but it's early in the session). However, it's a regular feeding frenzy in other states controlled by Republicans, especially those like Pennsylvania where Biden won last fall.

According to the Brennan Center for Justice,

In a backlash to historic voter turnout in the 2020 general election, and grounded in a rash of baseless and racist allegations of voter fraud and election irregularities, legislators have introduced three times the number of bills to restrict voting access as compared to this time last year. Twenty-eight states have introduced, prefiled, or carried over 106 restrictive bills this year (as compared to 35 such bills in fifteen states on February 3, 2020).

The Brennan Center has done a taxonomy of all those bills and found that they fall into four basic categories: (1) laws that limit mail voting access; (2) laws that impose stricter voter ID requirements; (3) laws that limit successful pro-voter registration policies; and (4) laws that enable more aggressive voter roll purges.

We can only guess that the Republican majority in the NC General Assembly is planning something special, even though the Trumpists in the state turned out in record numbers last fall and overwhelmed a similar surge in Democratic votes. Generally speaking, when more people vote, Democrats win. And Republicans don't like that.

'Course, a Democratic governor with the veto and enough Democrats in both houses of the General Assembly to sustain that veto may temper their ambitions.

Posted by J.W. Williamson at 2/02/2021 09:37:00 AM
Email ThisBlogThis!Share to TwitterShare to FacebookShare to Pinterest
Labels: voter suppression, voting rights