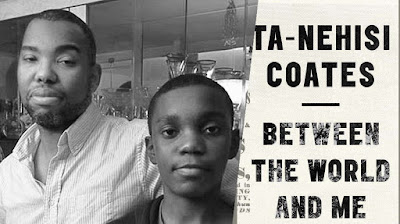 I'm a white man -- a Southern white man -- reading Ta-Nehisi Coates' "Between the World and Me." The author is one of the most famous Black critics in the US today. His book is tiny, only 152 pages of text. I read it quickly in two sittings. I'm reading it again, more slowly.

Coates frames the book as a letter to his 15-year-old son. The message is stark. You're being hunted, Coates tells his son, and the hunt can end -- often does -- in the destruction of your body, death in a New York minute. Who are the hunters? People who "believe they are white," when whiteness means power through superiority:

...the belief in being white was not achieved through wine tastings and ice cream socials, but rather through the pillaging of life, liberty, labor, and land; through the flaying of backs; the chaining of limbs; the strangling of dissidents, the destruction of families; the rape of mothers; the sale of children; and various other acts meant, first and foremost, to deny you and me the right to secure and govern our own bodies.

Indisputably, the threat of destruction comes most swiftly now and perennially from men wearing uniforms, carrying badges, with unlimited caches of ammunition -- law enforcement, standing in for us white folks and for the civic dream of American exceptionalism. Coats warns his son that any encounter is a roll of dice. Snake eyes can bring death, "the result of an unfortunate overreaction":

It does not matter if it originates in a misunderstanding. It does not matter if the destruction springs from a foolish policy. Sell cigarettes without the proper authority and your body can be destroyed. Resent the people trying to entrap your body and it can be destroyed. Turn into a dark stairwell and your body can be destroyed. The destroyers will rarely be held accountable. Mostly they will receive pensions. And destruction is merely the superlative form of a dominion whose prerogatives include friskings, detainings, beatings, and humiliations. All of this is common to black people. And all of this is old for black people. No one is held responsible.

(This is where I want to start whining, secure my escape from complicity -- the impulse to catalog my innocence, my personal disgust with police killings. "That's not me! I wasn't raised that way." But put a lid on that shit! Ta-Nehisi Coates is not my occasion to play pharisee.)

Coates writes frankly of his fear. He says he's always been afraid, all his life. He feared his tough father's belt. He feared the mean streets of West Baltimore where he grew up and where a boy as young as him once pointed a gun square in his face. As a student at Howard University, he feared the Prince William County police department, who trailed and shot to death a fellow student in a case of perverse mistaken identity. As a father now, he fears for his son, who has been raised in relative ease and privilege, which makes him maybe more prone to blunder into one of the multitude of mistakes that a young Black man can make in the presence of cops.

Coates admits he doesn't believe in God, doesn't even have the protective armor of religion that nurtured and reassured so many others in the face of slavery. If you don't have a God who'll always protect you (in theory) and lift you up to heaven (if only in fiction and gospel songs), you've lost a communion that might blunt the fear and the pain. I can identify with Coates in that absence of faith.

You can live the life of a Black man in America, but not everyone can communicate its sinew, sweat, confusion, humanity like Coates the writer. He doesn't sugarcoat the future for his son. He doesn't offer the trapdoor of hope. After all, American history weighs tons and can't be heaved off the chest as easily as a mere anvil. It sits down heavy on all of us, even the fantasy versions concocted by white supremacists who want to make it great again.

Posted by J.W. Williamson at 2/16/2021 11:32:00 AM
Email ThisBlogThis!Share to TwitterShare to FacebookShare to Pinterest
Labels: racism, Ta-Nehisi Coates

What Coates details is what James Baldwin told us all 60 years ago. "Progress" is indeed slow and dangerous in itself.

Like you J.W., I remember the 1970s and '80s and '90s when Boone police and Watauga Sheriff deputies and some in the District Attorney office made life very uncomfortable for Blacks, especially young men, in this community.

I hope there's been real change in these offices and not just appear so because of being submerged by thick social veneers.

I know, Mike. James Baldwin was one of the holes in my education, and I'm much the worst for it.