What's Richard Burr's Deal? Senator, You Are Weighed in the Balance and Found Wanting

North Carolina senators Richard Burr and Thom Tillis voted their fear yesterday. They're afraid of Trump, first, and of Trump's mob, 2nd (though the mob may be moving up in the standings after January 6th).

We heard from eye witnesses yesterday that several Republican senators were afraid to look at the 13-minute video of the insurrection. They turned their heads away, they averted their eyes, they pretended to be absorbed by paperwork in their desks. Did Richard Burr turn his head away? Did he avert his eyes? That cobbled-together quick video of the insurrection offered the ocular proof of what Trump's mob can do in service to the big lie. The senators might wink at the video evidence, but they can't escape basic geography. They have their butts planted in the actual scene of the crime (planted because every senator is literally required to be there sitting at his/her desk for the duration of the trial).

The mob, who evidently live to die for their chosen strong man, are the easily manipulated bully boys who carry resentment in their hearts. They could so easily be turned against you, couldn't they, senators? These are your voters (though some don't vote at all). You have encouraged them, nurtured them, fed their grudges, enabled their hatreds. That mob runs on belief impervious to logic, and up until the insurrection, you Republican senators could benefit from that bull-headedness without necessarily getting cut by flying glass. Now you know what they're capable of in their thousands. You have every good reason on God's green earth to avert your eyes from the Frankenstein you juiced into life.
Trump's 44 defenders in the US Senate, including our North Carolina senators, are desperately searching for any rationale to save Trump that is not based on defending or excusing what he did -- not just what he said at that rally on January 6th but what he said for months and months before as he laid the groundwork that he could only lose the presidency by fraud.
Yesterday, Trump's defense lawyer Bruce Schoen (the second one, not the first blowhard. Schoen was the angry Trump lawyer), practically promised civil war if Trump is convicted in the Senate. Given such a threat, we can understand -- rationalize -- the puddle of former (?) integrity that Thom Tillis has melted down to. Tillis whistles as he walks through the graveyard, but come on, Dude -- you just got another six years which ought to give you some sort of spine. Make some display of statesmanship that doesn't depend on loyalty to Trump. 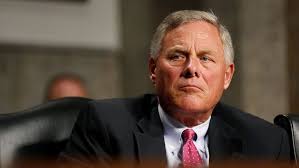 But what's the deal with Richard Burr? Back near the end of January, Burr grabbed at the "he's out of office and therefore beyond the reach of the Senate" argument: “This is a civilian now. A charge like this would go to the Justice Department and be referred for prosecution. Unfortunately, that’s not what they’re doing.” That late-January dodge represented a big change in Burr from his first pronouncement, a flash of disloyalty to Trump on Insurrection Day: “The President bears responsibility for today’s events by promoting the unfounded conspiracy theories that have led to this point.” It's a strangely stiff and formal statement, but at least it was accurate.
Burr's retiring in 2022. He doesn't have to face the Trumpist voters again, unless maybe he's thinking he'll need them for something else, for an appointment to something high, or for continued top billing among Party activists. If he isn't thinking of future office (or the life as a political hack), mightn't he be free to display a conscience, an adherence to the rule of law rather than to partisanship?
Posted by J.W. Williamson at 2/10/2021 10:56:00 AM
Email ThisBlogThis!Share to TwitterShare to FacebookShare to Pinterest
Labels: Donald Trump, Richard Burr, Thom Tillis, Trumpism