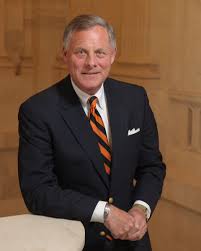 Senator Richard Burr's conscience in his vote of "guilty" yesterday earned him no respect from the NCGOP. Republican Party Chair Michael Whatley quickly issued a statement saying Burr's guilty vote was "shocking and disappointing." He stopped at that. Rep. Dan Bishop of the 9th District went further. He immediately joined in a call for a Party censure of Burr. Meanwhile, former Rep. Mark Walker, who's running for Burr's seat, used the Burr vote to fundraise for himself: “Wrong vote, Sen. Burr. I am running to replace Richard Burr because North Carolina needs a true conservative champion as their next senator.”

On the other side of the Republican Party, the side that still wants to put country before the perverse itches of one man, Judge Bob Orr announced that he'll be submitting his change of party registration this coming week, and he did it with all caps: "I CAN'T WAIT TO LEAVE THE GOP."

Even though Chair Whatley's statement -- all things considered -- was very short and perfunctory, more than it was scalding, he may not be able to hold his party back from an open split when Trumpists outnumber the Judge Orrs. If they intend to enforce loyalty to one man who mainly golfs, it can't be good for the future of traditional Republicanism in North Carolina. Can it?

My guess is that he didn't want to be remember for insider trading and decided to come down on the correct side of history....for once.