Your Once and Future GOP 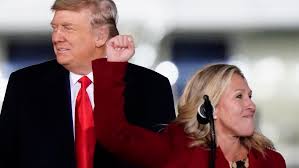 I started to write a post yesterday, speculating on what would happen in the US House Republican conference as it took up two problem children --  Liz Cheney, because of her impeachment vote, and Marjorie Taylor Greene, because of being one sick honey badger. Wouldn't it be cute, I started to write, if Liz Cheney ended up being the only person punished for the January 6th Capitol siege?

What happened was even worse. The Republican members of Congress decided to hug both women and make room for Greene's craziness while allowing Cheney to vote her conscience on Trump. Liz Cheney survived with only 61 votes against her. Those were the never-surrender Trumpist acolytes who intend to punish any Republican who fails to offer loyalty to the ex-president. Greene for her part got a standing ovation, we hear, apparently for saying she was sorry for the trouble she'd caused everyone else. But no apology, in true Trumpist form. “I won’t back down. I’ll never apologize,” she tweeted Saturday.

So it's up to the Democrats to strip Greene of her committees, and they will, we trust, later today.