We Are Not Stupid 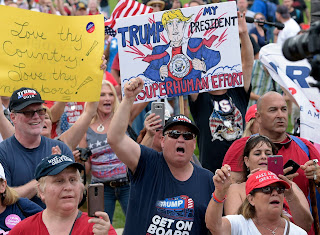 A North Carolina county Democratic Party received this direct message on its Facebook page, from a resident of South Carolina:

I didn't realize the Democrats we're so corrupt. Many of them should be impeached and in prison. A bunch of monkeys could run the country better than Biden. Never in my life have I heard so many idiots. Trump is probably the best president ever.look at his numbers . He has the best numbers in history.. you are also giving this country mostly fake news for your own agenda. We are not stupid .

This message was a semaphore sent from that man's gut. He's purely human, and hurting. His message was unencumbered by facts or logic, but facts and logic would be impediments to his defiance: "We are not stupid." Have no idea if this individual participated in the Capitol insurrection, but he has the profile for it: blind devotion to a cult leader, class-based resentment, a low-information, self-generating loop of assumptions and prejudices.

"I must thrive because those people are my enemies." Trump told this man a story, and he believed it. Belief shut down all other avenues to knowledge. Likely, the man with the semaphore will always be a believer. Resentment could curdle into violence. We hope not.

Meanwhile, the cult leader will be tried for his incitements tomorrow, but the fix is already in, the jury, already purchased. We may never recover from the poison he injected into the body politic. I can only pray that the toxin leaches away with time and that the man who wrote the message above, along with me and the rest of us crawling wounded, can be affirmed in our belief: We are not stupid.

Posted by J.W. Williamson at 2/08/2021 10:15:00 AM
Email ThisBlogThis!Share to TwitterShare to FacebookShare to Pinterest
Labels: Trumpism