Trump Bombshell Dropped on the Military: Will It Matter to the Congressional Race in NC-8?

The American military was already backing away from Trump -- carefully, to be sure (discussed more below) -- even before his contempt for military sacrifice became a bombshell revelation yesterday. 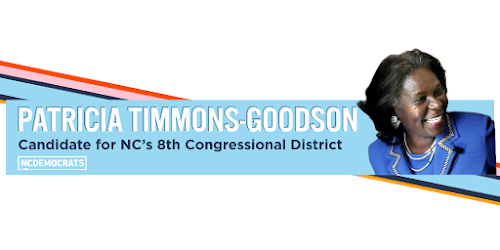 I immediately wondered how that totally credible news of Trump's betrayal would affect the Democratic insurgency of Patricia Timmons-Goodson down in the 8th Congressional District. She's from Fayetteville, in Cumberland County, which just happens to hold two large military parks: the US Army at Fort Bragg and the US Air Force at Pope, meaning, in short, that the military vote in Cumberland County could be a wildcard heavy thumb on the political scales of 2020. Being pissed at what Trump said could sway the election toward the Democrat. But are they pissed?

(NOTE: Used to be, in the old 8th district, only the northern, more rural parts of Cumberland were included, but that already included Fort Bragg and Pope. The new 8th adds all of Cumberland, including more urbanized and liberal Fayetteville. Which makes the 8th lean slightly more Democratic, though it's still stubbornly labeled "Lean Republican" by the Cook Report.) 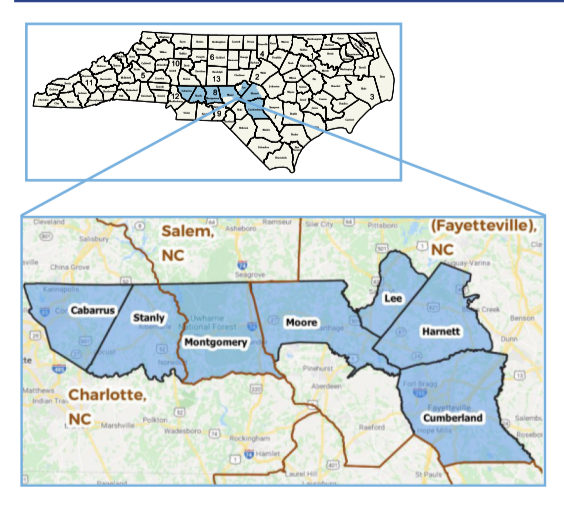 I've been surfing this a.m. for any answer to how Trump is playing there this weekend. Can't find a thing specific to the populations of Bragg and Pope, and the Fayetteville Observer gives me nothing. What I did run into was background on how the military decided to ban all displays of Confederate battle flags without triggering Trump's wrath (he has very forcefully defended everything Confederate). Because Trump's also notorious for not reading, the Pentagon's order cleverly buried their ban by not using the word ban, nor the word Confederate, and by making their policy order sound wholly positive, not negative. Defense Secretary Mark Esper signed the order on Thursday night, listing all that's allowed, and so much is allowed (U.S. and state banners, flags of other allies and partners, the widely displayed POW/MIA flag, and official military unit flags). The Confederate flag is not listed. Oops. But it would take reading to understand what just happened. The Pentagon's wording was "a creative way to bar the flag’s display without openly contradicting or angering President Donald Trump" (Lolita C. Baldor, AP).

That significant attempt to deceive the Commander in Chief is what I was referring to in the lead graph above: "Military, backing away from Trump already," even before he characterized their sacrifice as sucker-hood. Not to put too fine a point on it, the freshest and most promising new federal Democratic candidates since 2016 have tended to be former military men and women. I'm not going to list them here now. Take my word for it: the new Democratic star is likely former military, fed up with Donald Trump. I've profiled a bunch of them here since 2017, in many different states.

Timmons-Goodson is a distinguished lawyer and jurist, with 30 years experience including a seat on the NC Supreme Court and nomination by Barack Obama to the US 4th Circuit. She's massively accomplished and Black. The "new 8th" still contains plenty of the "old 8th," the conservative White counties of Harnett, Moore, Montgomery, and Stanly. A Black woman in the race complicates the Deep South metrics -- the incumbent Republican is a White man, Richard Hudson, who's supposedly more moderate than most of his brethren. But her candidacy maybe also liberates a different voting bloc that hasn't been participating up to their potential. The new 8th is about 1/4th Black. It's more heavily urban in the far east -- Cumberland -- and also the far west, Cabarrus (with its big city of Concord), which is increasingly a suburb of Charlotte and where there are several other strong Democrats making energetic runs for the General Assembly. They all mutually benefit one another.

I have no -- zero -- information nor insight about how Trump's words are playing among the active duty in Cumberland County, just curiosity to know. Not just the active duty personnel but also the retired military community, which I've been led to believe is substantial. The military has always been considered a part of the Republican base, hasn't it? Trump's been reportedly popular with the troops, and he's certainly courted their approval, which just makes his reported opinions about the Service all the more a betrayal.