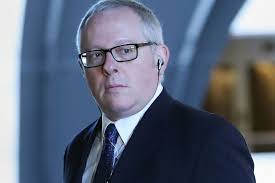 Michael Caputo, the top spokesperson for the Department of Health and Human Services and a longtime ally of President Trump's, is taking a 60-day leave of absence after a social media tirade in which he falsely accused government scientists of engaging in "sedition."

HHS announced the leave in a news release yesterday, which said Caputo decided to take the two months off as the department's assistant secretary for public affairs "to focus on his health and the well-being of his family."

The leave of absence effectively removes Caputo from government operations through November's election. The statement also announced that Paul Alexander, whom Caputo had brought in as a scientific adviser, would be leaving the department altogether.

Last week, Caputo came under fire after reports that he and Alexander sought to edit and delay public health reports from the Centers for Disease Control and Prevention. Emails from Alexander obtained by Politico complained to CDC Director Robert Redfield that the agency's Morbidity and Mortality Weekly Report "hurt the President," and described data-based publications on the risk of the coronavirus in children as "hit pieces on the administration" that undermined Trump's school reopening plan.
Posted by J.W. Williamson at 9/17/2020 08:02:00 AM
Email ThisBlogThis!Share to TwitterShare to FacebookShare to Pinterest
Labels: Donald Trump, health care