The Woman Who Kicked the Hornet's Nest

So today I found Angela Mayfield, a Democrat in Georgia running against a four-term incumbent Republican for a Georgia House seat. The incumbent doesn't even usually have an opponent, so Angela Mayfield is just what the doctor ordered -- a gutsy, no-nonsense, kick-ass woman unafraid to talk the way we talk. Also a progressive who's scaring the holy hell out of the white men.

"Anyway. I’m Angela Mayfield. I’m tired of tater tot legislators who care more about the health and welfare of Confederate statues, than Black mothers and babies. My mother follows me here, so everything I say, I say in front of my Mama. Underestimate me again."

She broke through to local fame when the managing editor of the Douglas County Sentinel scrolled through her Twitter feed for months past and found that she used the word "pussy" in reference to a sexual act which she said too many "babymen" were loath to perform. The editor sent Mayfield a question about that, being ever so careful not to use the p-word: Mayfield was scornful of his squeamishness and began to have fun with him: 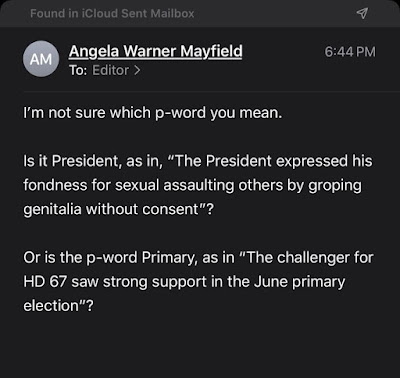 And then this, when the editor went suddenly mute: 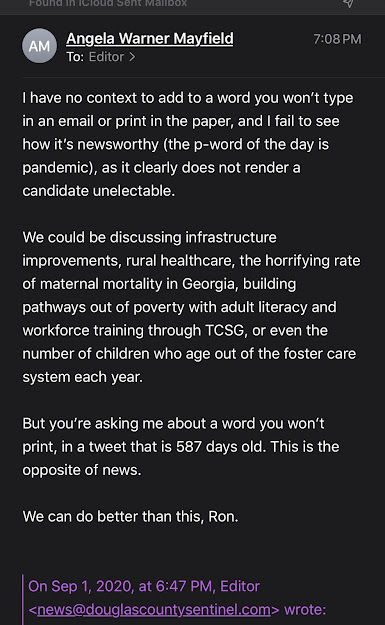 The editor of the paper retaliated with a front-page article, above the fold (which I've not been able to read in its entirety because ... paywall ... but I'm not giving this rag any of my money):

So Angela Mayfield goes into my 2020 pantheon of strong women running for office and ruffling feathers. I've no insight into this district, its demographics, nor her prospects, but it's fair to note that the newspaper's hit piece on her helped her raise some $50,000 in contributions. Her Republican opponent is scared shitless.

Posted by J.W. Williamson at 9/08/2020 11:55:00 AM
Email ThisBlogThis!Share to TwitterShare to FacebookShare to Pinterest
Labels: Angela Mayfield

Wow. I graduated Douglas County Comprehensive High School in 1973. I only lived in Douglas County nine months, but still have relatives there. It’s basically a bedroom community for Atlanta— very heavily Republican. I don’t know what her chances are but I hope she keeps up what she doing—-win or lose.