Both Republicans Resigned Last Night From the NC Board of Elections 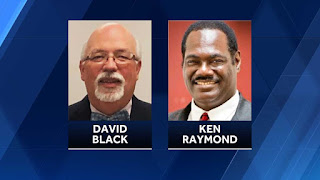 Republican NCSBE members David Black and Ken Raymond submitted hurried (un-proofread) letters of resignation only hours after they had agreed -- along with the Democratic members -- to a legal settlement over certain problems with mail-in ballots ... fueling a rumor that they were forced to resign by NCGOP bosses unhappy that they had failed to make absentee voting harder in North Carolina.

The legal settlement that Black and Raymond had agreed to, "if approved by a judge, would create new rules to make it easier for people to fix mistakes on their mail-in ballots. It also would extend the amount of time after the election that absentee ballots could come in and still be counted" (Will Doran and Jessica Banov).

Black and Raymond said they were resigning "on principle," the principle apparently being that the NCGOP leadership is mad because North Carolina isn't suppressing the vote enough.

The NCGOP must now submit names to Gov. Roy Cooper for replacement appointments.

The forced resignation of Black and Raymond -- if they were forced -- seems part of an overall scheme by Trumpists everywhere to cloak absentee-by-mail balloting in a pall of "fraud" to make it easier for Twitterman to declare himself the winner even if he isn't and to complete the politicizing of the Supreme Court (conveniently equipped by November 3rd with a new Trump toady put there to protect his interests).

Posted by J.W. Williamson at 9/24/2020 07:45:00 AM
Email ThisBlogThis!Share to TwitterShare to FacebookShare to Pinterest
Labels: David Black, Ken Raymond, North Carolina Board of Elections, voter suppression