Trump Depression. It's a Thing

I don't know what gets you down. If the daily dose of this guy Trump doesn't smite your cheeks, then you might be a fan and revel in the cruelty.

But depression? I've always worked jobs to vaccinate myself against it. Getting something done that needs doing, that's the ticket. But you get old and infirm and hunkered down to body blows and can't work in your garden, so you spend entirely too much time on screens. And because you're susceptible to hard news ("fake" to the fans), you absorb every new breach of ethics and morality and basic humanity like hammer blows, and because there is no chance that Trump can ever repent and become human, you slip a little into a spiritual malaise of your own making, a black hole. Why has god abandoned us?

Do you feel powerless, except for your vote? Your vote, which until this guy Trump came along seemed an inviolable right. Now it's endangered too. I've voted absentee by mail for several elections and have already sent in my ballot for 2020, and now I'm told by the authoritarian that he can probably eliminate my absentee ballot too and have his judges declare him a winner.

As of today we have these stats on mail-in balloting in NC:

Bottomline: We're about to surpass absentee balloting in 2016, and there are still over 800,000 absentee ballots still out there and still waiting to be marked and delivered.

The developments of just the last 48 hours could reduce you to a pulp of impotent outrage (what a name for a oom-pah band!).

“Well, we’re going to have to see what happens. You know that I’ve been complaining very strongly about the ballots and the ballots are a disaster — .... Get rid of the ballots, and you’ll have a very — we’ll have a very peaceful trans-, there won’t be a transfer, frankly. There’ll be a continuation.”

Rachel Maddow said last night that what we're going to do about this crisis is what we're doing right now, a penetrating and sobering insight. If we're sitting on the couch watching Netflix and worrying, that doesn't bode well for how we'll go into the looming constitutional crisis of 2021. We've got to stop giving in to hopelessness and do what we can. It's more than just believing in the resistance. We have to do, we have to stay aware, we have to contribute what we can or do what we must -- give money, make phone calls, knock doors, write letters, publish editorials, do the oppo research and keep our powder dry. Activism ain't depressed. It may be spooked by the whiff of Armageddon -- the effective end of the Republic -- but it doesn't lose sight of what's good: North Carolina boards of elections count the absentee-by-mail ballots first. 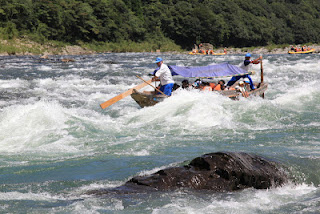 Don't let Trump depression warp the reality that there are signs of restoration all around us, from the flight from Trump by former Republican loyalists, to the flush of former military men running as liberal Democrats (documented on this site for months), to the wave theory of special elections in 2017 and the 2018 midterms, to the consistent polling showing advantage Democrats (the wave continues and grows). Our own good signs are evil omens for the other side, so I shouldn't wonder about a growing depression not in us but in the traditional rural Republicans all around us, whose own humbleness and religious faith and reverence for the law makes the embarrassing Mr. Trump a discouragement to civic activity, and the thought of actually defending him a hard option.

Posted by J.W. Williamson at 9/25/2020 06:52:00 AM
Email ThisBlogThis!Share to TwitterShare to FacebookShare to Pinterest
Labels: 2020 Blue Wave, Donald Trump

Positive thinking is powerful. Saving our nation from a horrible man not fit to govern is an essential and achievable goal - a vital response to the treachery of this president.

Positive thinking that this will all be over after his tremendous loss to someone who has intelligence and experience to be a productive and honest president and will honor the law and the Constitution. Morals return to the White House.

When anyone supports Trump they are whistling the Horst Wessel Song, whether they realize it or not.
It is too late after the sham election because Nazis have no ideology besides violent bullying and terror.
They may make promises they never intended to pursue or keep. (Did you get the flyer saying Trump provides cheap insulin?) This hurried appointment of a deficient and defective Supreme Court Justice to insure their rigged victory is typical of their methods. Yes, we are at a time of reckoning (inflection point?) when Capitalism has swallowed itself in a polarization of intangible wealth and power and these Fascists (Trump cultists) are poised to seize control by an available means. The pandemic has not been dealt with nor has Global Warming, so if we go Trumpy we are posed to burn like a lighter fluid soaked wasp nest. Biden is truly warmed over oatmeal, and considering the dire situation, we will be called on to sacrifice and resist, and looking at our people in the stores... leads me to doubt if we are up to the challenge. I can't find any appropriate analogy. Jerry says he's too depressed to winterize his garden and shows us a raft in a cataract. Give me a paddle: and a mattock. The opposition has assault rifles.