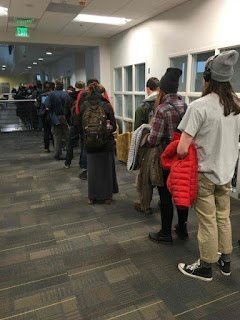 Appalachian State College Republicans are pissed that the two Republican members of the Watauga Board of Elections are suing to prevent early voting in the ASU student union. The lawsuit filed by Republicans Eric Eller and Nancy Owen barely a month before early voting is scheduled to commence drew this response from River Collins, president of AppState College Republicans: “I’m not going to lie. To see my party here do that is very disappointing. I didn’t like it at all. It made me furious honestly.”Even the president of the AppState chapter of Turning Point USA criticized Eller and Owen: “Attempting to move this polling precinct less than 30 days before the election will only result in a mess to the community during early voting and election day.” Turning Point USA is a pro-Trump conservative group which maintains a "Professor Watchlist" of teachers who, it alleges, discriminate against conservative students and advance what it considers to be left-wing propaganda in the classroom.
Once again, our congrats to Eller and Owen and their lawyer Nathan Miller for continuing to alienate young voters, especially those most likely to support their side. That takes real talent!
Posted by J.W. Williamson at 9/22/2020 08:15:00 AM
Email ThisBlogThis!Share to TwitterShare to FacebookShare to Pinterest
Labels: Appalachian State University, early voting in Watauga County, Eric Eller, Nancy Owen