9 Blackbirds Sitting in a Pie

"It's darkest before the dawn." 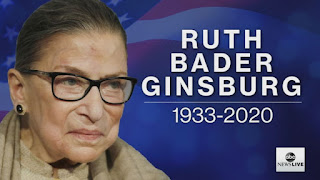 Get outta my face with that shit! I totally appreciate the proverb and get it that the November 3rd election is "the dawn," and dawn is supposed to reestablish hope when so much seems lost, but in all honesty I don't feel better. This moment is more like a minute to midnight to me, than anywhere near 6 a.m. There are still some 44 days til we vote the bastard out, say. Or, say, McConnell fails to get Trump's nominee through before November 3rd because of defections in his caucus. Will that even matter? Because McConnell will still have another bite at the apple, starting on November 4th, as he strong-arms a lame duck session with still plenty of time to display the full measure of his corruption.

Who are the potential Senate defectors from another McConnell power grab? The esteemed men and women who actually know right from wrong but who en masse gave up long ago objecting to wrong? The equivocators, the shrinkers, the shell-shocked. Which of these are the Senators most likely to resist?

(Presented here in rank order of most likely to stand firm against McConnell hypocrisy to least likely to let out a peep):

Lisa Murkowski (Alaska) -- Told an interviewer on Friday, shortly before the announcement of Justice Ginsburg’s death, that she opposed confirming a new justice before Nov. 3. “I would not vote to confirm a Supreme Court nominee,” she said. “We are 50 some days away from an election.” Murkoski has shown steel in her spine before, especially as relates to displeasing Trump. I think the guys don't strong arm this chick.

Mitt Romney (Utah) -- Increasing defiance of Trump all year, so maybe he's actually grooving to the perception that he finally took his balls out of the lockbox. This might be another watershed moment for a revivified Mitt Romney.

Charles E. Grassley (Iowa) -- Previously the judiciary panel’s chairman, said in 2018 that if there were a vacancy in 2020, he would not bring a nomination before his committee until after the election if he were still in charge. But he surrendered his gavel to Lindsey Graham (see below). Grassley is perfectly capable of standing up for principle, in his Grandpa Simpson way, just as he's also perfectly capable, in his Grandpa Simpson way, of getting confused and wandering out of frame. He did not say last night how he would vote as an individual senator. At least he's thinking about it.

Ben Sasse (Nebraska) -- As recently as August 10 called Trump's attempts at power-wielding "unconstitutional slop." Trump immediately lashed his naked back: “RINO Ben Sasse, who needed my support and endorsement in order to get the Republican nomination for Senate from the GREAT State of Nebraska, has, now that he’s got it (Thank you President T), gone rogue, again, This foolishness plays right into the hands of the Radical Left Dems!” Trump has Ben Sasse's number. He's disciplined Sasse before, and Sasse obediently sat in the corner. But he also likes to think of himself as a virtuous warrior, and he might get a wild hair and impersonate a do-or-die Marine for Halloween.

Cory Gardner (Colorado) -- Could the showdown over SCOTUS awaken Gardner's disgust with McConnell's hypocrisy, and might he attempt a "hail Mary" to turn around his fortunes in the Colorado Senate race? Hickenlooper looks likely to beat him. But Gardner's defection is a longshot. Gardner looks too cowed by the Trumpists, though maybe the independent vote in Colorado makes Gardner less predictably cowed than Susan Collins.

Susan Collins (Maine) -- The most endangered Republican incumbent (according to Peter Baker and Maggie Haberman). Collins told The New York Times this month that she would not favor voting on a new justice in October. “I think that’s too close,” she said. “I really do.” But it's a classic Susan Collins head-fake. She always caves. She really, really does.

Thom Tillis (North Carolina) -- Though he's shown rogue moments of independence, he's been whipped thoroughly into line, and he's gonna go for any SCOTUS nom Trump puts forward. Jumping ship would destroy him with much of the Republican base.

Martha McSally (Arizona) -- She knows she's losing to Democrat Mark Kelly in her reelection campaign. Losing means she's totally free to be as Trumpist as possible before she exits the scene.

Lindsey Graham (South Carolina) -- The chairman of the Senate Judiciary Committee, which would consider any nominee, said in 2018 that if an opening occurred in the last year of Mr. Trump’s term, “we’ll wait to the next election,” but then hedged in July, telling CNN that “we’d have to see.” In a statement issued Friday night mourning Justice Ginsburg, Graham, who is in a competitive reelection race of his own (against Jaime Harrison), made no mention of when to fill the vacancy. So ... as you were. Graham would never buck Trump/McConnell.

McSally, Tillis, Romney and the lot of them will vote for Trump's pick ASAP. It's what they do.

It has been shocking to see the utter corruption of the Republican Party, both locally and nationally. I am terrified for our nation.

A Senator who didn't make your list -- Lamar Alexander from Tennessee -- would be high on my list of Republican senators who might find their conscience and stand up against the McConnell power-grab. He's retiring, so what does he have to lose? I know he voted to acquit Trump from impeachment, but he also said he knew that what Trump did was wrong. In short, he knows right from wrong, and he's about to be free of political pressures forever. Might he join Susan Collins and Lisa Murkowski?

And incidentally, you were apparently dead wrong about Collins being a weak reed. She's already announced that she will not support voting for whatever name Trump puts forward for RBG's SCOTUS seat.

O Suzannah, you're right. I didn't think of Lamar, and I agree with you that he's an obvious candidate for defying the president.

I'm also very pleased to admit that I might have been wrong about Susan Collins.