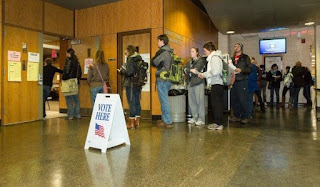 Eric Eller and Nancy Owen, the Republican members of the Watauga County Board of Elections, have filed a complaint in the Wake County Superior Court seeking to block an early voting site in the Appalachian State University student union.

Eller and Owen are represented by Boone attorney Nathan Miller, who has a long history of bringing suits to suppress the student vote.

Eller and Owen are asking for an expedited hearing on their complaint. Early voting is due to begin October 15.