Iconoclasm Has Its Limits

A few days ago, a Washington, DeeCee, commission formed in response to Black Lives Matter issued a report recommending that the Mayor and city government "remove, relocate or contextualize" the Jefferson Memorial and the Washington Monument because of the slave-holding history of those two presidential honorees. The report additionally "recommended renaming dozens of public schools, parks and government buildings in the nation’s capital — including those named for seven U.S. presidents — after studying the historical namesakes’ connections to slavery and oppression."

Conservatives lost their shit. They had not read past the word remove, which -- let's face it -- is both alarming and ridiculous, to get to the word contextualize, which ought always to be done for public art from the past meant to memorialize what certain elite groups were thinking about great personalities and great events at the time.

I can't account for the brilliant minds that decided to list the options that way -- "remove, relocate or contextualize" -- since the failure to deal with reality in the first two options -- relocate the Jefferson Memorial? Seriously?) renders irrelevant the only sensible option, "contextualize," and we're left wondering, "Is this committee a ship of fools or just stampeding for survival with the herd?" 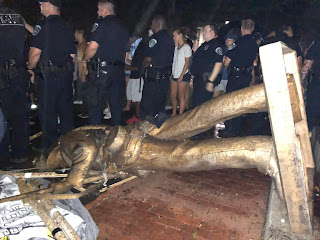 This is what gives liberalism and liberals a bad name. This is what Republicans mean when they screech about "cancel culture." Trump set the pace after Charlottesville: “So this week, it’s Robert E. Lee, I noticed that Stonewall Jackson’s coming down. I wonder, is it George Washington next week? And is it Thomas Jefferson the week after? You know, you really do have to ask yourself, where does it stop?”

If ever Trump could think clearly for a change, or within any contextual frame, I might have to agree with him. I don't like the blunt force trauma of wiping out the history of our mistaken venerations. Civic monuments erected at particular points in our history recorded contemporary thinking about the various flawed individuals who defined our values at that particular time. Contextualizing "Silent Sam" at Chapel Hill would have been preferable to pushing his nose into the dirt. Imagine a new plaque in front of "Silent Sam": "Here stands the expression of white supremacy as it existed in 1890 North Carolina. This statue was meant to proclaim, 'Venerate the Confederacy to keep the Blacks in their place!' "

Southern monuments, in particular those erected between 1890 and 1920 (and most frequently on public property), were mainly reminders of Jim Crow. So I cannot grieve the removal of those set up at court houses, like the one removed from the Chatham County Courthouse in Pittsboro, or the ones on State Capitol grounds also recently removed to storage. Those were objectionable because their expressions of "Our White Heritage" looked, because of their overt placement near the benches of justice, not only sanctioned by government but part-and-parcel of government, with the power to segregate, harass, and execute.

I cherish the Gettysburg Battlefield which is littered with hundreds of statues -- some of them the size of WWI battleships. The Confederacy is amply and suitably represented. The North Carolina monument in particular haunts me. I had to get up close and study the faces of the soldiers, ordinary enlisted men -- the bravery, determination, and resignation that sculptor Gutzon Borglum, the creator of Mt. Rushmore, captured. Their tragic devotion to the cause of maintaining slavery humbles one's tendency to pass judgment too quickly on our ideological opponents.

Civil War battlefields or museums -- that's where the Confederate monuments and statues belong, within and because of an historical context. There they are no longer the pugnacious and threatening specters of white people lording it over black people to the point of violence. They are images of the brave and dedicated men who rebelled for the sake of maintaining an economy built on slavery, and who paid the ultimate price.

Some of the Southern generals were brilliant and cunning, and those qualities speak to pretty perennial American values. Whether generals or mega-businessmen, we've tended to elevate the most ruthless among us. It's a sad fact (read Jill Lepore's recent "These Truths: A History of the United States") that our Constitution was written essentially to protect property from certain Democratic urges that the elite feared, and especially the property of Southern plantation society. Realizing those flaws in our founding values, contextualizing them (and amending the damn Constitution!), is the best we can do with what we've been given. We can't remove our foundations, but we can understand them more profoundly.

Posted by J.W. Williamson at 9/06/2020 11:54:00 AM
Email ThisBlogThis!Share to TwitterShare to FacebookShare to Pinterest

"There they are no longer the pugnacious and threatening specters of white people lording it over black people to the point of violence." You're way wrong on that Jerry. A quick look at recent 4-3 votes by Gaston County Commissioners to keep the 1910 Confederate statue in place is exactly that, Whites lording it over Blacks.
You can never convince me that looking into the faces of the bronzes on the Gettysburg Battlefield NC Monument you see anything besides the iconography of Klansman sculptor installed in 1929. It's delusional to claim you see noble emotions in something so artificial and fabricated.
That short-sightedness also expands to your criticism of the commission in DC looking for a solution.
You'll reconsider this later.

Red Hornet, I was trying to draw a distinction between a monument contextualized in a museum or on a Civil War battlefield vs. one looming over the entrance to a Southern county courthouse. That's a distinction worth noting for its different social or political messages.

We can certainly disagree on whether the sculptor of the NC monument at Gettysburg did anything remarkable. I think I have lattitude to suggest that art, applied to tragic death, can transcend us-versus-them simplicities. The NC statue is one of the few at Gettysburg that tries to depict the battle from the point of view of enlisted men, rather than generals on their big horses, and it had an impact on me.

I see danger in breaking the iconography of the past based on reading history backwards. Yes, Thomas Jefferson was a "rapey" slave-owner, which certainly detracts or at least complicates his legacy but should not wipe him out. Use every man after his desserts, and who of us then could escape whipping? (paraphrasing Hamlet). If we reduce the life of an historic figure to just one bad thing he did, we're denying history its complexity and its chance to teach us complicated lessons about human nature.

The DC commission which recommended the removal of both the Jefferson and the Washington monuments did not set out to give the Trumpists a cudgel to beat the liberals with, but they succeeded nevertheless. I think someone wasn't thinking very strategically.

J.W., your final sentence is very important in this age of political contention. The DC group didn't reflect that valuable thought.

I am in discussion with others about a proposal for a Mellon Foundation "Monuments Project" grant. Could you find a moment for a call about extending your own perspective on monuments to questions of their curation, interpretation and rectification?

Would you care to participate in a discussion, resulting from a referral by Lonnie G. Bunch III, for curation, interpretation and rectification of Confederate artifacts? A range of Mellon Foundation "Monuments Project" grant applications are anticipated to result that align with observations in your comments.
Douglas A Johnston
Reference:
https://nyti.ms/3eT9NmF
https://nyti.ms/2HOJEK6
Vita:
UNC School of Public Health, Executive Masters Program faculty (1990-2009)
International Journal of Museum Management and Curatorship, legal notes editor (1986-1990)
N.C. Museum of Art and N.C. Museum of History, attorney (1977-1986)

Douglas Johnston,
Please write me via email: jww@boone.net and I'll share a phone number with you.