Would You Take a Hurried-Up Trump Vaccine? 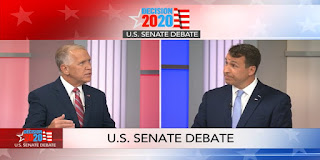 Sen. Thom Tillis and Democratic challenger Cal Cunningham faced each other last night in the first of three scheduled debates. This morning, the News and Observer chose to headline Cunningham's expressed "hesitance" about taking a COVID-19 vaccine that was rushed through trials to serve the politics of a lying liar. Tillis said that Cunningham's suspicion that politics was trumping science was "irresponsible."

Irresponsible? It seems responsible in the extreme to be suspicious of having something injected into our bodies that hasn't been thoroughly tested and vetted and certified by public health professionals as not only safe but also effective for the intended purpose.

Right now this minute, Trump has installed a man cheerleading for armed rebellion into a key communications post at the Centers for Disease Control -- Michael Caputo, a close ally of convicted liar Roger Stone, "made outlandish and false accusations on Sunday that career government scientists were engaging in 'sedition' in their handling of the pandemic and that left-wing hit squads were preparing for armed insurrection after the election."

Sedition. That's a Trumpian set-up if I've ever seen one (and I've seen plenty). Any scientist who subsequently suggests that Trump's hurried-up vaccine is not safe, not effective, will be branded a traitor to the president. You can see that coming, right?

Posted by J.W. Williamson at 9/15/2020 09:03:00 AM
Email ThisBlogThis!Share to TwitterShare to FacebookShare to Pinterest
Labels: Cal Cunningham, Thom Tillis