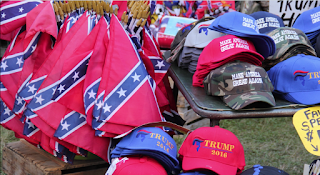 Racial polarization is, and has always been, an unfortunate fixture of North Carolina politics. For an old Southern state whose history is more intertwined with slavery than perhaps any other state but Virginia, this is somewhat expected. From the Wilmington Coup of 1898 to the Greensboro sit-ins, North Carolina’s largely white power structure has always resisted the fullest measure of racial justice and equality.

It would be a comforting idea to believe that North Carolina has completely changed since then. And yet, all signs indicate that our state’s right-wing flank is still locked in resistance against the rights of non-white North Carolinians. Like a chemical agent, the Trump era has both emboldened and flared the slow burn of racism inside the modern North Carolina GOP. Through actions both symbolic and real, Republicans have responded by embracing the Trumpist strategy of white grievance politics with gusto. Indeed, the party seems increasingly comfortable with its role as, in the words of Gene Nichol, a “white people’s party.” This poses major challenges to our future as a pluralistic, modern democracy.

Let’s just put it bluntly: the North Carolina GOP has a white supremacy problem. And it’s not getting better. Indeed, it’s likely to only get worse. And we need to talk about it in the open.

The opportunity in white backlash

Since the North Carolina GOP hijacked our state government 9 years ago, their list of offenses has grown infamous: their hyperpartisan gerrymanders and voter disenfranchisement measures have been extremely well-documented, as well as their constant lying on both issues. The political logic behind this strategy is cold-blooded and obvious: Black North Carolinians vote overwhelmingly Democratic, and Republicans don’t want Democrats to vote. This is the essential reason why North Carolina Republicans - among whom there is not a single non-white legislator - made their assault on the electoral rights of voters of color their top legislative priority.

To be sure, racism has always been an integral part of North Carolina politics. There’s been plenty of evidence of it in both parties, though the Democrats have done a much better job overall of expunging the worst elements from their ranks. 45% of the Democratic caucus in the General Assembly is made up of people of color today, including the party’s Senate leader.

By contrast, Republicans haven’t just failed to make these efforts - they’ve done the opposite. The NCGOP has made few inroads among communities of color, largely because they haven’t tried. 91% of registered Republican voters are white in a state that is about 63% white, 22% Black and 10% Hispanic. There is, again, not a single non-white Republican legislator. Instead, the party increasingly welcomes open antagonisms of our state’s atrocious record on racial justice. North Carolina Republicans simply refuse to engage on fundamental questions of racial justice. Indeed, they increasingly see “racial justice” itself as a loaded concept.

Far from discouraging racial division, Republican leaders have evidently seen more opportunity in exploiting it. Across the state, we’ve seen Republican leaders fall back to the Jesse Helms strategy of pandering to white racial grievance by “protecting” Confederate monuments while attacking BLM protesters in thinly-veiled coded terms like “thugs” and “criminals.” The North Carolina chapter of the Sons of Confederate Veterans even started their own PAC to support Republican candidates they saw as friendly to the so-called “Confederate cause,” including Phil Berger, Tim Moore, Steve Troxler, and, of course, Larry Pittman. Indeed, Confederate flags are nearly interchangeable with “Trump 2020” ones at these events, as protests in Chapel Hill, Pittsboro, and Graham have shown countless times. 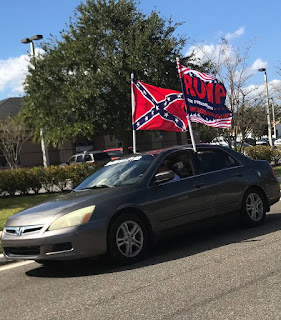 The examples of the NCGOP’s embrace of racists are almost too many to count. Attendees at a big recent Republican rally in Alamance County - which was co-organized by the founder of a local hate group - screamed “White power!” at bystanders. Sitting Republican state representatives - Dennis Riddell and Stephen Ross - spoke at that same rally. Actions like these are an unambiguous message (and, for some, a threat) to a whole community. (If that’s what they yell at unknown passers-by, one can only imagine what they say among themselves.)

Was it inevitable that Republican leaders would embrace the racists in their party? After all, the dominant Republican opinion-leader in the country, Donald Trump, has made overt racism a hallmark of his presidency. It would’ve taken real political courage for Republican leaders - especially in the South - to resist that potent siren call from above. But as we know, political courage is in very short supply at the NCGOP. Instead, we’ve seen Republicans in Raleigh do the opposite. And this says volumes about where their party is headed.

The data is clear: North Carolina is quickly becoming a more diverse and less rural state. Whites, while still a clear majority of voters, are continuing a long-term trend of decline as a percentage of the whole. White voters were a little over 70% of the total state electorate in 2016, and they are currently about 66.6% today, according to the State Board of Elections. They will likely drop below 60% of North Carolina’s total electorate by 2028, if not sooner. Instead, multiracial voters - particularly Hispanics - are becoming a larger share of the electorate.

This is a nightmare scenario if your party is overwhelmingly white and rural and relies on its base’s worst instincts of racism for power. But as the pool of white voters slowly shrinks, losing even a small proportion over insufficiently strong support for Lost Cause mythology could be decisive for them. But instead of broadening their appeal, we have instead seen the NCGOP double down on attempts to consolidate the white vote with grievance politics.

Ideally, we would have two (or more) parties that both tried to appeal to all constituencies in North Carolina. Black, Hispanic, Asian, Native American, and other voters are just like white ones in the sense that each group contains a wide range of ideological and political preferences. Black conservatives very much exist - they’re not even uncommon! But the fact that so many feel demonstrably uncomfortable voting for Republicans should give us all reason to think truthfully about why. It is not, as Republican leaders like to claim, simply a “messaging” or “packaging” problem.

The Democratic Party is far from perfect itself. White Democrats in particular must be sensitive to how our party speaks to and includes non-white representation. For the large majority of its history, the state of North Carolina has been actively hostile to its non-white residents - and especially voters. And that’s when the state even considered them fully human at all. We are well within living memory of nonwhite residents not enjoying the full benefits of citizenship. And it was not the beneficence of white North Carolinians that won those basic civil rights for Black and non-white citizens; it was federal enforcement action. (It may yet be that way again.) It is incumbent on white Democrats to understand this history as a good reason for centering Black representation - both in our party and in our state as a whole. In a quickly diversifying state and nation, this strategy is not only how we will all win, but how we will make our government best serve its people.

And what about the Republicans? Well, it isn’t up to us to solve their problems for them. If Republican leaders simply lack the courage (or perhaps the interest) to lead their party into accepting North Carolina as a pluralistic, multiracial democracy, then that is their problem. Our job is not to help Republicans rehabilitate their own party - our job is to win. By winning, and building a strong progressive movement in our state, we can keep the other side out of power. We are, after all, a majority in North Carolina. Let’s act like it.

Posted by J.W. Williamson at 9/27/2020 08:45:00 AM
Email ThisBlogThis!Share to TwitterShare to FacebookShare to Pinterest
Labels: North Carolina Republican Party, racism