We Were Reminded Last Night: Trump Doesn't Own a Dog 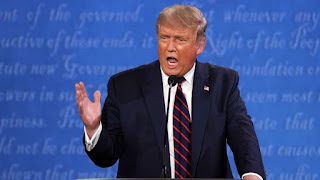 If I were part of Joe Biden's team, I think I'd be arguing this morning that he shouldn't take part in any more events put on by the Commission on Presidential Debates. I'd probably lose that argument. The other side would say, "It'll look like he's running away. They'll say he's afraid of Trump. He's got to stand up to the abuse and remain calm." I actually also agree with those opinions, so I might end up being glad I lost the argument. But ... jeez!

Donald J. Trump isn't really running against Joe Biden. His insulting attack last night was aimed at the election itself, at the process of even having an election, for as he keeps telling us, any election that doesn't declare him a winner is illegitimate, rigged, a fraud. So last night he was trying to destroy the process itself, the very notion that there's any escape from his own chaos.

Posted by J.W. Williamson at 9/30/2020 06:49:00 AM
Email ThisBlogThis!Share to TwitterShare to FacebookShare to Pinterest
Labels: Donald Trump