The Way the Pendulum Swings in North Carolina 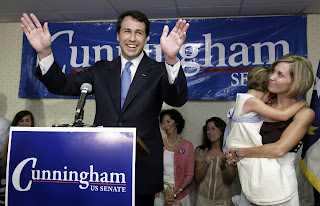 Am I going to read an article titled "Suburban Women Hold the Balance of Power in the Swingiest of Swing States" (meaning, yes, North Carolina)? You bet I am!

It opens with this profile of "a decisive voter," meaning a voter who hasn't decided yet but whose vote, once they do decide, will be decisive:

She’s white, college-educated, unaffiliated and moved to a close-in suburb of Charlotte or Raleigh in the last decade or two — and as Election Day looms, she’s still making up her mind.

One of those places most up for grabs? According to US Senate candidate Cal Cunningham, it's definitely “the urban ring around Charlotte.” Said Cal, “That is going to decide probably the presidential race and possibly the outcome of the United States Senate. And it’s ground zero for a marquee governor’s race.”
Good to know. We've been following several General Assembly races in Cabarrus County, part of that "urban ring around Charlotte," and we like the image of a confluence of irresistible forces there.
Republican operatives are thinking Trump can scare those suburban women into voting for him because antifa! ... BLM! ... invasive species threatening the suburbs! Democratic operatives are convinced that suburban women are not idiots -- they know who's been stirring the trouble and for what ends.
Posted by J.W. Williamson at 9/08/2020 08:15:00 AM
Email ThisBlogThis!Share to TwitterShare to FacebookShare to Pinterest
Labels: 2020 Blue Wave, Cal Cunningham