Ricky Hurtado Takes Up the Democratic Banner in NCHouse 63 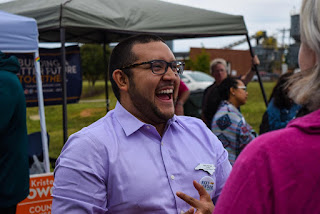 On July 10th I was very keen on Erica McAdoo's running again in 2020 in NC House District 63, because as a first-time candidate in 2018, Erica came within 300 votes of beating a strong Republican incumbent. But McAdoo dropped out of the 2020 race on July 18. Ricky Hurtado, the son of Hispanic immigrants, has stepped forward to take McAdoo's place, and he did so with the backing of NC House members Ashton Clemmons, Graig Meyer, Zack Hawkins, and others.

Numbers guru Michael Bitzer rates the remapped district as "Competitive Lean Republican." The "competitive" part of that ranking likely arises from the district's shedding of some 7.50% of its previous registered Republicans in the most recent remapping. FlipNC.org is a good deal more sanguine about the prospects; they list this district as their number one most flippable seat in the NC House for 2020.

Can the son of working-class immigrant parents, even a man with an inspiring story and a big personality like Ricky Hurtado, do as well as Erica McAdoo did in 2018, and do even better, which is what it will take to overcome first-time-candidate status as well as some baked-in cultural resistance in Alamance County?

Hurtado has an appealing video posted on Twitter in which both he and his wife Yazmin talk straight to the camera about themselves as Burlington natives who went on to distinguish themselves via higher education and productive, community-oriented careers. Don't understand why but so far that video hasn't appeared on Hurtado's Facebook page nor on his website.

Perhaps he'll add policy positions going forward, but so far Hurtado's website is devoid of any issue advocacy. He's a blank slate, and as much as I want to believe that his outstanding eleemosynary involvement in his community makes him the candidate for my values, I'd still like to see a few things spelled out.