Someone Is Out To Get Us 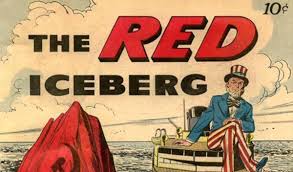 Growing up in West Texas in the 1950s, I witnessed paranoia about Russia first-hand, about how Russian moles never stopped plotting world-wide domination. Beware of the United Nations! It's so Red it's pink! Beware the prophets preaching peace and "one world government." Oh, the wheat and cotton fields, they stayed awake all night worrying about the 2nd grade teacher planning to Trick 'r Treat For UNICEF, and what it might portend for the survival of freedom.

Now Russia is in the White House. They've perched so long they've roosted. Virtually. Also literally: Trump has enjoyed 11 phone calls with Vladimir Putin (that we know about) over the past three years. "The content of those conversations has mostly been kept confidential." Yeah, we know. Locked up in a secret safe computer-Fort Knox because Trump knows that if we know what Putin's telling him, and what he's promising Putin, we'd revolt.

At least I hope we'd revolt. Because, there are clear and disturbing signs that the whole Republican Party is just okay with Trump's divided loyalty. Certainly, his grassroots support could care less. It's all fake news to them. But it's the Republican members of Congress that should worry us, educated men and women who can presumably read, yet they are plain blah about Russia's evil Rasputin dominating our president. Is it because they're so cowed by Trump or more especially afraid of his mob of low-information supporters? Trump believes what Putin tells him, thinks what Putin thinks, and does what Putin says. Meanwhile, the Republican members of Congress -- bless their hearts! -- mouth the Ukrainian mythology too. "A fictional narrative," Fiona Hill labeled it yesterday, which came straight from Russian "security services." 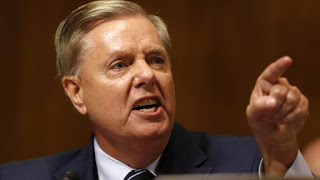 Republicans in the Senate, however, know better. They know the origins of the Ukraine Lie, and how it's been propagated, because they've been briefed by American intelligence officials (CIA, et al.). That news just broke last night -- that senators were informed in recent weeks about "a yearslong campaign to essentially frame Ukraine as responsible for Moscow’s own hacking of the 2016 election." But even after that intelligence briefing ("wise up, gentlemen!") and even after Fiona Hill riveted the TV audience by asking legislators directly and bluntly not to be stupid dicks and spread the Russian lie, there goes Senator Lindsey Graham off to dig up the black yucky truth about Ukraine's conspiring for Hillary in 2016 while simultaneously paying a bribe to Joe Biden's son. The headline in Slate: "Lindsey Graham Is Now Investigating the Bidens Anyway, Cementing Ukraine’s Role as Hapless Fall Guy."

The paranoia in 1950s West Texas about the Russkies was maybe too hysterical. And certainly ahead of its time.

Hey, at least they ain't Commies!