"Stand Against Trumpism!" Democrats Should Forget About Fading to "Pabulum Moderate" 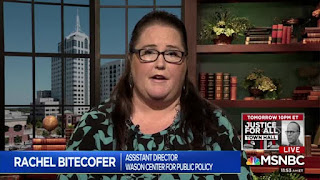 The General Elections are now a year away, and it's a time for high anxiety in both camps. I won't characterize what gives both sides the willies. You know who you are. You know what scares you.

I was reading Rachel Bitecofer's analysis* about next Tuesday's election in the state directly to the north of us: "High Stakes in Virginia General Assembly Election will Preview 2020 Presidential." Bitecofer's a numbers gal, and I generally trust people who work with numbers.


*Rachel Bitecofer has become a political prognosticator to rival Nate Silver at FiveThirtyEight. Bitecofer is assistant director of the Judy Ford Wason Center for Public Policy at Christopher Newport University in Newport News, Virginia. In 2018 she predicted a 42-seat "blue wave" in the US House. Dems took 40 seats. No one else came close to her accuracy, including Nate Silver. She regularly offers opinions on Twitter.

Bitecofer saw the 2017 Virginia Blue Wave coming. That localized surge heralded the 2018 Blue Wave in the rest of the country. In Virginia in 2017, Democrats picked up some 15 seats in the state House and a handful in the Senate, putting them within single digits of having control of both chambers. Some Trump-lite Republican incumbents immediately went into a political crouch. A few -- enough as it turned out -- flinched on health care, broke ranks to join Democrats in passing an expansion of Medicaid. Many another suburban Republican temporarily forgot the name Trump and showed some bland interest in gun reform. Then what followed immediately? The Virginia Blue Wave of 2018 flipped three US House seats and absolutely buried Senator Tim Caine's hyper-conservative opponent. Scared out of their wits, Republican candidates running up-hill races this year are suddenly going hard right to keep their troops in line. We'll see Tuesday if that tactic worked.

Bitecofer's great discovery (still undiscovered by too many Democratic candidates): It was not suburban Republicans who made the Blue Wave in 2018. It was "a whole different pool of voters" -- largely independents -- who hadn't been voting, or who only voted inconsistently, who suddenly showed up at the polls: "college-educated women; millennials and Gen Z voters; minority voters; and Independents who 'lean' left or at least don’t 'lean' right." What motivated them? "These voters, whether they know it or not, have been galvanized to the polls via negative partisanship because of the election of Donald J. Trump. Trump has shaken into action a sleeping demographic giant...."

In Virginia and elsewhere.

Bitecofer's lesson which some Democratic candidates refuse to learn: Winning over Republican voters doesn't make a wave. Winning new voters makes the wave. Bitecofer: Where Republicans voted in 2018 in huge numbers, they voted for Republicans. Democrats can't and won't win them. It's new voters that Democrats need, and you don't win new voters in the Age of Trump by going "moderate Democrat." The new voters are enraged by Trump. You harness their rage by showing you're willing to stand and fight Trumpism with progressive ideas. You strongly reassert the traditional American values that Trump has shat upon. (If only Dan McCready had believed the Bitecofer data! If only he had gone full progressive warrior, instead of pabulum moderate.)

Here's the Bitecofer revelation about 2018: "...in many districts, especially where the candidates were focusing on being moderate, the Democratic turnout still underperformed its potential, and still underperformed turnout among Republicans...." The pathetic loss in the NC-9 special election in September could have been reversed if Dan McCready had inspired more enthusiasm among non-traditional voters. That's a warning for Cal Cunningham running for US Senate next year.

Basic algebra: If the election of Trump woke a giant, the impeachment of Trump -- and his acquittal by Republican lickspittles in the Senate -- surely won't put the giant to sleep. Will it?