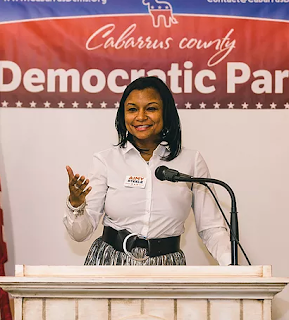 In 2018, Aimy Steele left her job as principal of Beverly Hills STEM Elementary School in Concord, N.C., to run for the NC House (District 82). That November, she out-performed Democratic expectations in that Cabarrus County district, earning 47.25% of the vote and losing to long-serving incumbent Linda P. Johnson by 1,978 votes out of almost 36,000 total votes cast. (As of January 2018 there were 62,444 registered voters in the district. More on that number below.)

Steele announced way back in January of this year that she "wouldn't be returning to the school house" because she intended to try again in 2020, "buoyed by her experience as a candidate and what she learned along the way."

I went back to read what I wrote about Aimy Steele in 2018. Based on her personal history, I called her a "wonder woman," but I also acknowledged the giant windmill that an entrenched incumbent like Linda Johnson was going to represent. I titled the piece "Donna Quixote." (Too clever by half. So report me.)

FlipNC just rated the 82nd in its second tier of 2020 most flippable districts, saying they expect Democratic prospects to improve there by 3 points in 2020. I dunno. Michael Bitzer admits that after the most recent remapping, Republican strength is down (a measly) 1.60% in the district, but Bitzer still rates the "Predicted Republican Vote Share" in the newly redrawn 82nd at 55.70%. Still a big windmill. Bitzer rates the district as "Lean Republican."

But look here: In the 2018 election, some 26,484 registered voters didn't bother to show up in District 82 -- a total of 35,960 votes cast out of 62,444 registered voters. Wow. That's an untapped source for any candidate who can stir some enthusiasm among the disaffected, the uninterested, the turned-off voters of Cabarrus. That poor voter turnout in 2018 appears to be not just typical of off-year elections in the 82nd, but plain typical. Turnout was higher in 2016, a presidential year, but not that much higher -- 42,636 total votes cast. Still a lot of disengaged votes left on the table (though clearly, from her losing margin in 2018, Aimy Steele got to some of them).

When Steele launched in January, she told Education Week that she would be using "two of the biggest lessons from the 2018 campaign to guide her this time around: start fundraising early and have a better ground game, with early organization and door-knocking in neighborhoods and precincts." With reference to the first, I intend to contribute to her campaign. With reference to the 2nd, "better ground game" is music to my ears. Retail politics. Knock on those doors of voters who aren't typically voting.

But first, you've got to identify them. I hope Steele has a talented computerized data operative as well as a finance director.