Democrat Erica McAdoo's candidacy in 2018 for NC House District 63 (Alamance County) was a heartbreaker on the night of November 6. She came within 299 votes of beating incumbent Stephen Ross in a district that was rated "competitive." McAdoo made it competitive by mounting a ground campaign of plenty of door-knocking and direct-voter contact. It takes volunteers to do that, which also takes the ability to warm the heart and stir enthusiasm.

That enthusiasm has got to reappear and grow in 2020, 'cause Erica McAdoo is running again.

District 63 is one of those gerrymanders engineered by advanced computer technology. 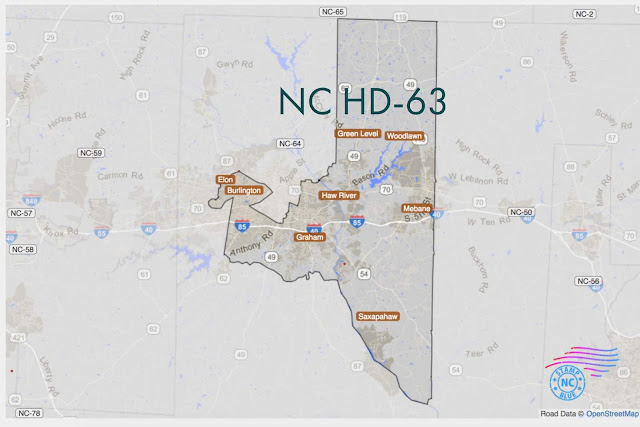 That fish-hook appendage on the left side above -- the tentacle into the Boone Station township (Elon) -- why, it's mostly over 97% white, O my brethren, which might give you a hint that the mapmaker needed that jog to offset the 31% black population in the Pleasant Grove township (the northernmost rectangle in the map above) and in south Burlington.

The most affluent townships in District 63: Melville, Boone Station, and Thompson (Melville and Thompson together make up much of the easternmost and southernmost portion of the district).

The townships with the highest educational attainment: Boone Station, Melville, and Thompson.

If I were running McAdoo's ground game, I'd run a telephone and text poll of all voters in Boone Station, Melville, and Thompson with one question: "Do you support President Donald J. Trump." That's it. That single question is going to turn up surprises of which voters to door-knock in 2020. Also which voters to avoid. (See, there's more than one use for computers!)

She'll have to be just as active in Pleasant Grove and in other black neighborhoods with direct voter contact (and voter registration!). If African-American voters aren't energized in 2020, all else is lost.

McAdoo is evidently running on the same themes as 2018, particularly support for schools, support for small business, and support for expanding Medicaid (judging from the too-long announcement video above). I think I'd flip that order, magnify health care and the incumbent Ross's fealty to a party that is still resisting Governor Cooper's attempt to expand the Affordable Care Act in North Carolina. The resistance is just meanness, especially on the part of Senate President Phil Berger. (By yesterday, there was a watered-down Medicaid expansion bill brought to a House committee by Republican Rep. Donny Lambeth and voted out favorably. It's sudden appearance signaled a softening on the issue among House Republicans. Is incumbent Ross among the melted? I would bet he is. Donny Lambeth's Medicaid-lite bill has a work requirement, which is unnecessary as the vast majority of those without any access to medical insurance are the working poor.)

But maybe before I did any of the above, say tomorrow, I'd ask my own campaign people, "How's the oppo research coming on Representative Ross's record in Raleigh?" He's got many votes to highlight, especially if he suddenly decides he's in favor of Medicaid expansion in North Carolina.