To date we have Cal Cunningham, Trevor Fuller, Erica Smith, and Steven Williams all of whom have declared they'll be participating in the Democratic primary on March 3rd to take on incumbent Republican Senator Thom Tillis. 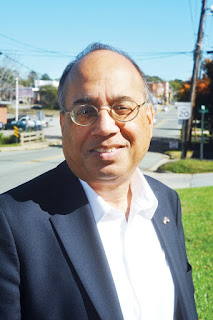 Now there's a fifth, Atul Goel, a Raleigh physician who's on a quest to visit all 100 counties and talk to voters. He was born in India, came with his family to this country when he was 10, and he talks knowledgeably about issues, especially health care and how to reform the system.


“We all know we have a health care crisis that needs to be addressed,” he said. “We don’t have affordable health care access for everyone.”

He said he feels his years of experience in health care equips him to address the issue as a policymaker.

Involved for a number of years with Democratic party politics in Wake County (he has served, for example, as a precinct chair) Goel said he grew frustrated hearing potential policymakers discuss health care.

“I can tell they don’t know what they’re talking about,” he said. “I’ve been involved in a wide variety of the health care aspect.” ...

“It’s a serious issue I just feel needs to be addressed,” he said. “I don’t have all the answers, but I understand the issues and want to be part of the team that does something about it.”

Posted by J.W. Williamson at 11/08/2019 09:40:00 AM
Email ThisBlogThis!Share to TwitterShare to FacebookShare to Pinterest
Labels: Atul Goel, Thom Tillis