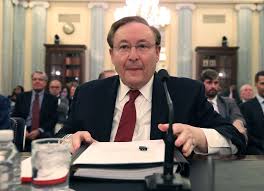 Barry Myers was nominated by Trump in November 2017 to head the National Oceanic and Atmospheric Administration (NOAA), and though he passed a Senate committee for confirmation, he has never gotten a vote by the full Senate. Yesterday he asked to have his name withdrawn for medical reasons.

NOAA, "which has responsibilities stretching from the seafloor to low Earth Orbit," is most famous for its National Weather Service (also the agency most depended on by citizens). Big, important agency. Real science, which needs a real scientist.

Which Barry Myers wasn't. And still isn't. He's a businessman. He was the CEO of AccuWeather since 2007 and (you won't be surprised) advocated for the privatization of weather science and forecasting (no kidding) -- at the expense of the taxpayer-funded National Weather Service. So, a clear conflict of interest. Naturally, there was also strong opposition to Myers from the scientific community.

The Man Who Would Be Weather God. And just Donald Trump's type.

Posted by J.W. Williamson at 11/21/2019 09:22:00 AM
Email ThisBlogThis!Share to TwitterShare to FacebookShare to Pinterest
Labels: Barry Lee Myers, Donald Trump