Welcome to the Woods, Babe. Mark Johnson Is Running for Higher Office 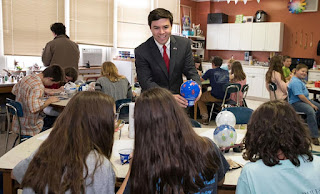 Mark Johnson, who since 2016 has been NC's controversial Superintendent of Public Instruction, as late as last Friday was saying he was definitely going to run for office again in 2020, but for what he couldn't say yet. There are offices higher than Superintendent that might benefit from his freshness, said his spokesman, Jonathan Felts (who also likes to be called "Johnson's political consigliere"). Maybe lieutenant governor. Maybe even governor. "...Change is needed at the top here in North Carolina. Read into that what you will," Felts emailed the WRAL on Saturday.

Today we know. Johnson's running to follow Dan Forest into the Office of the Lieutenant Governor. He will appear on next March's Republican primary ballot along with a host of others (see below).

For months Johnson has refused to say whether he would run for reelection. We all thought the coyness had to do with the rocky ride he's had as superintendent. According to the NandO,


The last three years have seen Johnson lobby for school choice and personalized learning. He’s redirected state funds to purchase computers for teachers, a process which has drawn complaints from critics about the process used and the money spent. ("Report: Thousands of Mark Johnson's iPads are gathering dust in Raleigh")

Over the last several months, Johnson has faced scrutiny over his decision to award an $8.3 million contract to Istation to test the reading skills of K-3 students. He bypassed the recommendations of an evaluation committee to use a different vendor, accusing the group of using a flawed process to explain his actions.

Johnson has fought with the N.C. Association of Educators over his statements about teacher pay, his support for charter schools and his opposition to the last two mass teacher protests that caused schools to be closed while educators marched on lawmakers in Raleigh.

Kind of a tool. 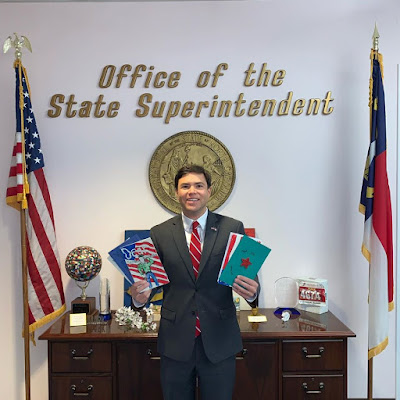 A smug tool. He's a lawyer from Forsyth. Was in his first term as a member of the Forsyth School Board when he decided to run for superintendent of the whole state in 2016 against long-time incumbent June Atkinson. Before that, he had taught public school for two years. Slim credentials for such a show pony. Johnson's a photo-op legend in just three years. He has his photo taken a lot -- holding books, looking over the shoulders of children, grinning, grinning, grinning.

In addition to Mark Johnson, these are the announced Republican candidates (as compiled by T. Heung Hui):


▪ State Rep. Yvonne Holley, Raleigh, in her fourth term in the NC House.

▪ State Sen. Terry Van Duyn, Asheville, a member of the legislature since 2014.

▪ Bill Toole, a Charlotte lawyer and a former chairman of the Gaston County Democratic Party.

Posted by J.W. Williamson at 11/12/2019 11:56:00 AM
Email ThisBlogThis!Share to TwitterShare to FacebookShare to Pinterest
Labels: Mark Johnson, public education