Another Significant Republican Retirement From the NC House 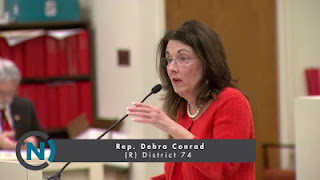 News and Observer reporter Dawn B. Vaughan said on Twitter that NC House Rep. Debra Conrad of Forsyth County (District 74) will not seek reelection. I've looked everywhere to find Conrad's statement, but it's not on her Twitter feed nor her depopulated Facebook page. Plus her website is no longer available. Sure does look like a general shutdown.

Conrad is chair of both the banking and the finance committees in the House and has held her seat since 2012. She used to be considered "invulnerable," but Democrat Terri LeGrand gave her a scare in 2018. Plus Conrad's district has been remapped. She lost over 3% of her Republican constituency, a not insignificant diminution considering that LeGrand came within 5 percentage points of beating Conrad in 2018.

LeGrand has moved on for next year to run for a Forsyth senate seat (District 31). Conrad's retirement is a great pickup opportunity for the right candidate. The district has been listed as one of the most flippable red-to-blue in 2020.